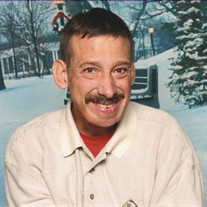 Memorial services for Terry will be held on Friday, June 5, 2015 at 3:00 p.m. at Faith Lutheran Church in Lincoln, NE. Pastor Brad Beckman will officiate the services. Private family inurnment will take place in the Exeter Cemetery. Memorials are directed to the family for later designation. Terry Lee Chapman was born on July 1, 1966 in Geneva, Nebraska to Jerry D. Chapman and Esther A. (Rice) Chapman. He passed away on May 30, 2015 at Milford, Nebraska at the age of 48 years, 10, months, and 29 days. Terry graduated from Lincoln High in 1987 and lived most of his life in Lincoln, Nebraska. He held several jobs through workshops of Community Alternatives Nebraska. Terry loved to go to church and was a member of Faith Lutheran Church in Lincoln, Nebraska. He was always ready to go anywhere but really enjoyed eating out and going on shopping trips. He liked music of all kinds, but especially enjoyed polka. He was a Husker football fan, enjoyed playing cards and loved to have his picture taken. He was widely known throughout Lincoln from his walks and visits. Terry had friends in lots of places and had a number of close friends and caregivers who were very important to him and enriched his life. And in turn, he enriched the lives of those who were fortunate enough to know him. Terry was preceded in death by grandparents Everett and Ivy Chapman of Fairmont and Fay and Henrietta Rice of Bradshaw. He is survived by his parents Jerry & Karen Chapman of Fairmont, NE and Esther Wessels of York, NE; grandmother Luana Sullivan of Lincoln, NE; brothers Larry & Christina Chapman of Seward, NE, Perry & Victoria Chapman of Geneva, NE, Tyler & Tammy Lawrence of Crete, NE; sisters Corinna & James Bauer of McCool Junction, NE, Christine & Matt Harre of Exeter, NE, and Amy Shaw of California; and many nieces and nephews.

The family of Terry Lee Chapman created this Life Tributes page to make it easy to share your memories.