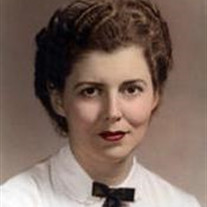 Theo May Garland was born in Orient, Iowa to Carl & Lucy (Needles) Speed on March 2, 1927. She passed away on November 9, 2011 at the Exeter Care Center in Exeter, Nebraska at the age of 84 years, 8 months, and 7 days. Theo grew up in the Greenfield, Iowa area and graduated from Greenfield High School. As an adult, she moved to Fillmore County, settling on a farm near Ohiowa, Nebraska. Theo was a cook for Ohiowa Public School from 1968 to 1980 and for the YRTC in Geneva until she retired. She also cooked for Ivan & Pat Dunse at the Ohiowa Café, where we understand a lot of fun times were had! Theo married Lewis (Bud) Frederick Garland on May 23, 1960 in Kearney, Nebraska and they resided and farmed in the Ohiowa area. Theo helped Bud on the farm, and she could often be seen driving their 1951 chevy truck, hauling grain into Ohiowa. Theo was a very gifted woman. She baked beautiful cakes for years for many area weddings. She also painted many paintings and she enjoyed sewing. Theo was a member of the Ohiowa United Methodist Church and the Ohiowa Chamber of Commerce. Theo was preceded in death by her parents Carl & Lucy; sister Isa Merritt; brother-in-law Deb Clayton; brothers-in-law and sisters-in-law Robert & Velma Bock and Arnold & Sharon Garland. She is survived by her husband Lewis (Bud) Garland; children Nancy Rose Westover and Fred Carl Frycek; sister Wilma Clayton; nephews and nieces Allan Garland; Larry Garland and wife Shawna and their children Shelby and Cody; Terri Garland; Kristi Coggins and husband John and their children Cole and Dane; Bobbie Itzen and husband Marvin and their children Marla and Ty; Jim Clayton and wife Diane and their children Debra and Ross; John Clayton and wife Brenda and their children Elisha and Daniel; Jeff Clayton and wife Kim and their children Dakota, Dalton, and Danica; Tom Clayton and wife Pat and their children Mike, Nicki, and Joni; Rose Holman and husband Jerry and their children Stacey, Scott, and Shelly; Bob Clayton; and David Merritt and wife Karen and their daughters Kristi and Kari. Services for Theo were held on Friday, November 11, 2011 at 10:00 a.m. at the Grace Lutheran Church in Ohiowa with Kim Dunker officiating. Lola Johnson accompanied the congregation in the singing of "In The Garden" and she also accompanied Kristi Coggins in the singing of "Amazing Grace." Pallbearers for the service included Allan Garland, Larry Garland, Jim Clayton, John Clayton, Tom Clayton, and Jeff Clayton. Interment was held in the Ohiowa Public Cemetery. Farmer & Son Funeral Home was in charge or arrangements. Memorials are directed to the family.

Theo May Garland was born in Orient, Iowa to Carl & Lucy (Needles) Speed on March 2, 1927. She passed away on November 9, 2011 at the Exeter Care Center in Exeter, Nebraska at the age of 84 years, 8 months, and 7 days. Theo... View Obituary & Service Information

The family of Theo M. Garland created this Life Tributes page to make it easy to share your memories.

Theo May Garland was born in Orient, Iowa to Carl &amp; Lucy (Needles)...

Send flowers to the Garland family.