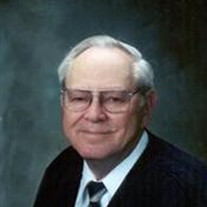 Funeral services for Ted will be Saturday, October 8, 2011 at 2:00 p.m. at the Trinity Evangelical Lutheran Church in Cordova, Nebraska. Interment will be in the Zastrow Cemetery. Memorials are directed to the Trinity Evangelical Lutheran Church, Exeter Fire & Rescue Units or the Exeter Senior Center. Theodore “Ted” Larsen, 85, of Exeter, passed away Wednesday, October 5, 2011 at the Exeter Care Center in Exeter. He was born on January 14, 1926 to Knud and Othea (Paulson) Larsen in Cushing, Wisconsin. Ted served in the U. S. Army from 1944 to 1947 and married Bernadeen Johnson on October 29, 1950. He worked for the U S. Postal Service for thirty-five years, twenty of those years as postmaster at Exeter. Ted was a member of Trinity Evangelical Lutheran Church in Cordova and an Exeter Volunteer Fireman, served on the rescue unit and on the cemetery board. In later years he was quite active and participated at the Senior Center in Exeter. He was honored this year as a sixty-five year member of Exeter American Legion Post #218. He also maintained membership in the V.F.W. Other interests included golf, horseshoes, card games, shuffleboard and spending time with his family. Ted is survived by his wife of sixty years, Bernie; children, Larry of Wuppertal, Germany, Tom of Galesburg, Il., Wayne and David Rush of Murphysboro, IL, Rodney of Exeter, NE., Connie and Pete Kreifels of Dunbar and Karen Larsen and Craig Kenworthy of Seattle, WA., and by grandchildren, Jessica and Jaclyn Kreifels and David Larsen. Other survivors are Ted’s twin brother Knud G. Larsen and wife Carolyn of Lincoln, NE. sister, Elly Petersen of Crete, sisters-in-law, Ruth Steinke of Seward, Myrna Mehser of Unadilla, and brother-in-law, Jake Wattles and many nieces and nephews. He was preceded in death by his parents, son, Ted A. Larsen and several siblings, in-laws, nephews and nieces.

The family of Theodore I. Larsen created this Life Tributes page to make it easy to share your memories.