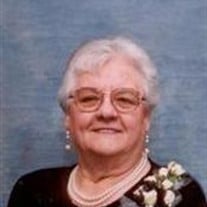 Theresa Barbara (Gergen) Reinsch was born to Marie Anna Grote and William Jacob Gergen in Fillmore County on May 7, 1930 and passed away in Sutton, Nebraska on August 1, 2011 at the age of 81. Theresa was united in marriage to Elmer Reinsch on May 10, 1950 at St. Mary’s Catholic Church near Shickley. To them seven children were born.Theresa was a loving wife, mother, grandmother and great grandmother. She delighted in having her family gather together, spending time with them and cooking and baking for them. She was known to be able to create a meal in a short time with little effort. Theresa was famous for her delicious cinnamon rolls, pies, banana cake and chocolate chip cookies. She was popular with her kids’ college roommates who knew there would be a bag of fresh cinnamon rolls or cookies for them to share when they got back. Seldom did a visitor stop by her home when she didn’t have a freshly baked item available to offer them. In earlier years, Theresa had a huge vegetable garden and the last few years, she still was able to have a smaller garden of tomatoes and cucumbers. She avidly followed her children and grandchildren’s activities and sporting events. It seems she always had a little notepad with her to keep track of the score at ballgames. She and her family enjoyed playing cards together, especially Pitch. All were welcome in her home and Dotty and Virg’s daughters (city girls) nicknamed her and Elmer’s farm as the “Funny Farm” in reference to the good times and laughter they enjoyed when visiting the farm. Theresa was a prayerful woman and one of her many Rosaries and her prayer books were never far from her reach. She will be truly missed by all who knew her.Theresa was a member of the St. Mary’s Altar Society and the Shickley American Legion Auxiliary.Theresa is survived by her husband of 61 years, Elmer; sons and daughter-in-law, Gerald and Jill of Brainard; Daniel, Timothy and Russell all of Shickley; daughters and sons-in-law, Beverly and Lou Kipper; and Mary and Keith McConnell, all of Lincoln. Grandchildren are Cari (Kevin) Kaup of Omaha; Megan (Mark) Gannon of Omaha; Travis (Aftan) Reinsch of Lincoln; Chelsey (Nathan) Lefever of Geneva; Tyson Reinsch of Lincoln; Laura Reinsch of Denver; Erica Reinsch of New York City; Jeffrey Reinsch of Colorado Springs; Nicholas and Jacey McConnell of Lincoln; Matt (Megan) Yank of Lincoln; Michael Reinsch of Lincoln; Caressa and Kellen Reinsch of Shickley; Great grandsons are William, Carson, and Ethan Kaup; and Cooper and Hudson Lefever; sisters, Florence Dondlinger of Geneva; Sister Marionita Gergen, O.S.F. of Campbellsport, Wisc.; Loretta Davis of Nebraska City; and sisters-in-law and brother-in-law, Marjorie Hesse of Shickley; Mike and John Maloney of Deerfield, Illinois; and Dotty Kress of Mundelein, Illinois; and many nieces, nephews, cousins and friends. She was preceded in death by her parents; a daughter, Monica; granddaughter, Paris Yank; sister, Dorothy Steube, brothers and sisters-in-law, Irwin & Rita Gergen; Paul Gergen; Fr. Charles Gergen; Jerome & Mollene Gergen; and Clement Gergen; and brothers–in-law; Darrel Steube; Bob Dondlinger; Henry Hesse; and Virgil Kress. Memorial Service for Theresa will be Thursday, August 4, 2011 at 10:30 a.m. at St. Mary's Catholic Church in Shickley, Nebraska. Rosary will be held Wednesday evening at 7:00 p.m. at St. Mary's Catholic Church. No visitation. Memorials are directed to the St. Mary's Cemetery Association, The Nebraska Children's Home Society or the Family in lieu of flowers.

Theresa Barbara (Gergen) Reinsch was born to Marie Anna Grote and William Jacob Gergen in Fillmore County on May 7, 1930 and passed away in Sutton, Nebraska on August 1, 2011 at the age of 81. Theresa was united in marriage to Elmer Reinsch... View Obituary & Service Information

The family of Theresa B. Reinsch created this Life Tributes page to make it easy to share your memories.