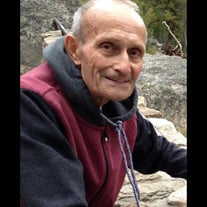 Funeral services for Tom will be held on Tuesday, August 9, 2016 at 10:30 a.m. at the St. Stephen's Catholic Church in Exeter. Father Steve Thomlison will officiate the services. Burial will be held in the Exeter Cemetery following the funeral service. Visitation will be Monday from 1:00 p.m. to 5:00 p.m. at the Farmer Funeral Home in Exeter. A Rosary will be prayed at St. Stephen's Catholic Church on Monday, August 8, 2016 at 7:00 p.m. Memorials are directed to the St. Stephen's Catholic Church or the Exeter Volunteer Fire Department. Thomas Burton Manning was born in Sawyer, NE to Earl and Clara (Biba) Manning on April 7,1930. He passed away on August 3, 2016 in Lincoln, NE. As a very young boy, Tom lived in Sawyer until 1934, when his father moved his elevator business, house, and barn to Burress, NE. He was then raised in Burress, where he also attended country school. He attended high school at Exeter Public School in Exeter, NE, where he graduated with his high school sweetheart, Marilyn Murphy in 1947. He briefly attended business school in Lincoln before returning to Burress, joining the family grain business. In the summer of 1949, he and Marilyn were married. They resided in Exeter for one year, then moved to Burress, where they lived for the remainder of their 65 years of marriage. It is there that they raised their eight children and taught them by example to be hardworking and honest. Tom felt that one of the most important gifts he could give his children was a good education. Tom and Marilyn were united in marriage at St. Stephens Catholic Church in Exeter on June 11th, 1949. They held their wedding dance at the Burress Dance Hall. Shortly after, the historic hall was filled with grain. They spent their Honeymoon in Grand Lake, Colorado. Tom and Marilyn loved and respected each other in all walks of life. Together they shared an everlasting love. Instilling the importance of family was very important to them. Most years they would take the family to Grand Lake in the summer to enjoy the beauty of the mountains. One of Tom’s greatest joys was taking his children on mountain hikes to the ranger station on top of Shadow Mountain. His last mountain hike was in 2014 at the age of 84. It was a one-mile hike, which included one of his favorite points of nature, Adams Falls. His final trip to Grand Lake was last September 2015. Tom loved to spend time outdoors, whether it was for work or for pleasure. He enjoyed river fishing, gardening, hiking, a lifetime of scooping grain, and endless mowing! His dedication to neighbors, customers, friends, and family was ever present. He will be remembered as an honest, hardworking, kind, gentle, and caring man. He will be eternally loved, and forever missed. Tom was preceded in death by his wife, Marilyn, daughter Clara, and brother, Richard (Dick). He is survived by sons Thomas David Manning, and wife Bette, Fairmont, NE, Chris Manning and wife Brenda, Exeter, NE, Mark Manning and wife Leanne, Crete, NE, Kent Manning and wife Cindy Fairmont, NE, Matthew Manning and wife Heather, Lincoln NE; daughters, Melinda Hofferber, Westminster, CO, Jennifer Manning, Lincoln, NE; 15 grandchildren; 11 great-grandchildren.

Funeral services for Tom will be held on Tuesday, August 9, 2016 at 10:30 a.m. at the St. Stephen's Catholic Church in Exeter. Father Steve Thomlison will officiate the services. Burial will be held in the Exeter Cemetery following the funeral... View Obituary & Service Information

The family of Thomas B. Manning created this Life Tributes page to make it easy to share your memories.

Send flowers to the Manning family.