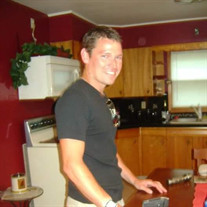 Timothy Adam Bedlan was born to Gene L. Bedlan and Roma L. (Frankforter) Bedlan on May 26, 1980, at York General Hospital in York, Nebraska, and passed away on September 13, 2018 at Bryan West Hospital in Lincoln, Nebraska at the age of 38 years. He was one of 3 children born in the family. Tim, affectionately known as Butch by all that knew him, grew up in the Shickley community. He attended school there and graduated with the class of 1998. He resided in Shickley until 2011 when he moved to Geneva. He was currently living in Lincoln at the time of his passing. From a young age, Butch enjoyed tagging along with his father helping in the construction business. Upon high school graduation, Butch continued working with his father. He felt a sense of security and pride in putting in a day’s work. In his free time, he enjoyed spending time at the lake, water skiing, collecting coins, reading, and attending husker football games with his good friend Chad. Butch especially loved his dogs, particularly Frank & Hardy. It was evident by the affection that Butch showed his four legged companions, that they were very important to him. Break time on construction jobs always involved throwing the tennis ball to the dog and some good ear scratching. It was also pretty common to see one of the dogs riding shotgun in Butch’s truck when he was driving around. We can’t judge Butch by the disease that consumed him, but more by the type of friend he was. He had a good heart, and he loved to tease and throw one-liner’s at you, and those are the things we will remember and miss most about him. Butch was preceded in death by his grandparents Leo & Marge Bedlan and Chet & Clare Frankforter; and uncle Ken Bedlan; and aunt Pam Worm. He is survived by his father Gene Bedlan and special friend Niki Howe of Shickley, Nebraska; mother Roma Bedlan of Lincoln, Nebraska; sisters Lori Robbins and husband Mike and Amy Bedlan all of Tucson, Arizona; and nephews Jaden, Taylor, and Nicholas: uncles and aunts Bob & Marge Bedlan of Shickley, Nebraska, Karen Bedlan of Omaha, Nebraska, Jim Bedlan of Reno, Nevada, Max & Nancy Frankforter of Geneva, Nebraska and Rosiland Brettmann of Deshler, Nebraska, Margaret Frankforter of Lincoln, Nebraska and Harlan Worm of Wahoo, Nebraska; and by many cousins and friends. A Memorial Mass for Butch was held on Monday, September 17, 2018 at 11:00 a.m. at St. Mary Catholic Church in Shickley, Nebraska. A Rosary was prayed at 10:30 a.m. prior to the Memorial Mass. Father Mike Morin officiated the service. Carol Grote accompanied the congregation in the singing of “Be Not Afraid,” “Prayer Of St. Francis,” “Here I Am Lord,” and “Song Of Farewell.” Honorary Pallbearers included Chad Bumgarner, Tyler Miller, Miki Loos, Ryan Bedlan, Deric Lichty, Jesse Kempf, and Mitch Schlegelmilch. Inurnment of ashes was held at the St. Mary Catholic Church following the Memorial Mass. Farmer & Son Funeral Home of Geneva was in care of the arrangements and online condolences can be left at www.farmerandsonfuneralhome.com Memorials are suggested to the family for future designation.

Timothy Adam Bedlan was born to Gene L. Bedlan and Roma L. (Frankforter) Bedlan on May 26, 1980, at York General Hospital in York, Nebraska, and passed away on September 13, 2018 at Bryan West Hospital in Lincoln, Nebraska at the age of 38 years.... View Obituary & Service Information

The family of Timothy A. "Butch" Bedlan created this Life Tributes page to make it easy to share your memories.

Send flowers to the Bedlan family.