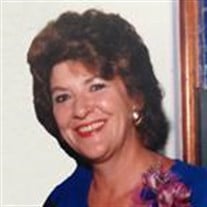 A Memorial service will be held at 2:00 pm Monday, January 5, 2015, at the Trinity Lutheran Church in Bruning, Nebraska. In lieu of flowers consider a donation to the Bruning Public Library in Memory of Tina Domeier. Tina lived a full life as a city girl and a country girl! Tina was born in Chicago on January 26, 1949 to Duke and Iolene Stonehouse. She received all of her formal education in the city attending Sutherland Elementary School, Morgan Park High School, and Northwestern University. Growing up, Tina was always active in sports at a time when women were just beginning to be recognized as equal. While at Northwestern she also had the opportunity to study in Russia. After graduating from Northwestern and working for several years in the admissions office at the university, she entered the investment business, once again being one of the only women. Her skills in selling and trading bonds were valued and she excelled. The fact that she could golf with the male customers did not hurt! Tina maintained her connection with Northwestern with student recruiting and being elected as an alumni trustee. In 1989 Tina met Darreld and maintained a friendship over the miles. In 1993 Tina took a leap of faith, leaving the big city to become part of the Domeier family, located in Bruning, NE. Darreld and Tina wed on December 24, 1994. It wasn’t long before Tina’s charisma won the hearts of Darreld’s children and grandchildren. Tina demonstrated a love that will forever bloom in the family’s lives. Darreld and Tina frequently traveled for business and pleasure. These travels took them all over the world enjoying time with each other and family. Tina maintained close contact with her Chicago family and took an annual trip with her mother and sister. Those trips were filled with fun, laughter and they always brought back memorable stories. Throughout Tina’s life in Nebraska she used her leadership characteristics to touch the community. She served as the Assistant Manager at Bruning Grain & Feed with a specialty in public relations. Whether it was the senior citizen beauty pageant, youth development, serving with the Nebraska Grain and Feed Association, or building the Bruning Public Library, Tina always added her special touches. In the words of Tina, “My journey from Chicago to Nebraska – from bonds to beans – quite an adventure!” Together Tina and Darreld built a cabin, named “Lake Tina”, which became the location for many gatherings. Lake Tina has and will remain a location that fulfills the family’s needs for fun, laughter, and relaxation. Tina always had a smile, an encouraging word and a great idea. Her giving nature and commitment to family and community blessed many lives. Tina is preceded in death by her father Duke Stonehouse, and mother Iolene Stonehouse. Survivors include husband Darreld Domeier, daughter and son-in-law Wendy (Warwick) King, daughter and son-in-law Jill (Jason) Brase, son and daughter-in-law Dan (Andi) Domeier, daughter and son-in-law Jamie (Aaron) Pospisil. Grandchildren Lynlee Linscomb, Kaitlyn Krupicka, Talmadge Krupicka, Allison King, Aidan King, Dylan Domeier, Derek Domeier, Peyton Domeier, and Brayden Pospisil. Great grandchildren Natalie Linscomb, and Cambrie Linscomb. Sister and brother-in-law Kathy (Jim) Poole, nephew David (Denise) Poole, niece Ann (Gerrick) Johnson, great nephews Max and Henry Poole, and numerous cousins.

A Memorial service will be held at 2:00 pm Monday, January 5, 2015, at the Trinity Lutheran Church in Bruning, Nebraska. In lieu of flowers consider a donation to the Bruning Public Library in Memory of Tina Domeier. Tina lived a full life... View Obituary & Service Information

The family of Tina M. Domeier created this Life Tributes page to make it easy to share your memories.