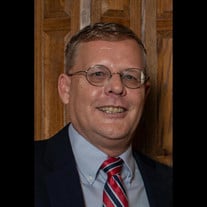 A Private Family Funeral Service for Todd was held on Monday, November 30, 2020 at 11:00 a.m. at the United Methodist Church in Geneva, Nebraska with Pastor Wayne Larson and Kim Dunker presiding. Pianist, Jan Schelkopf, accompanied Vocalists, Eric Larson, Michael Larson, Greta Johnson and Zach Johnson as they sang, “Be Still My Soul” and “How Great Thou Art”. Casket Bearers included Russ Kalkwarf, Zach Johnson, Michael Larson, Kevin Myers, Eric Larson, Josh Kalkwarf and Braden Myers. Honorary Casket Bearers were Kody Myers, Norman Westerbuhr, Vaden Myers, Brian Hale and Paul Worthington. Private Graveside Services were conducted at the Geneva Public Cemetery. Memorials were directed to the United Methodist Church. Farmer & Son Funeral Home was in charge of funeral arrangements. Todd A. Westerbuhr was born to Larry and Emily (Pfister) Westerbuhr on January 21, 1968 in Lincoln, Nebraska, and passed away on November 20, 2020 at his home in Maricopa, Arizona at the age of 52. He received his education in the Geneva Public Schools and graduated from Geneva High School in 1986. He enjoyed playing sports and participated in football, basketball, track, and baseball while in school. After high school, he attended Kearney State College. In his junior year at KSC, he joined the Phi Kappa Alpha Fraternity. He was selected as one of the Homecoming candidates his junior year. Todd graduated from Kearney State in 1990 with a degree in business and finance. During the summer, he started working for the FDIC in the Dallas-Fort Worth area. His office was located in Arlington. In 1997 he was transferred from the Arlington office to Phoenix, AZ. In 2001 he moved to Charlotte, North Carolina and started working as a Financial Analyst for the Washington Mutual Bank. He moved to Seattle in 2004 to work in the Washington Mutual main office. In 2008 Washington Mutual was purchased by JP Morgan, so he went back to Phoenix to work for the FDIC. He bought a home in Maricopa, Arizona and continued working for the FDIC until his death. Todd was incredibly kind, patient, and generous; he would never turn away someone in need. Although quiet and reserved, many enjoyed being in his presence because he was fun to be around and made each person feel worthy of his attention. He had an amazing work ethic and enjoyed working for the FDIC and with his FDIC family. Todd was a loyal son, brother, uncle, friend, and co-worker, and he will be missed by many. He is survived by his parents, Larry and Emily of Geneva; his sister, Janelle and her husband Wayne Larson of Des Moines, IA; his nephew, Eric, of Aurora, Ill; his nephew, Michael, of Ames, IA; his niece, Greta, and her husband, Zach Johnson of Ames, IA; aunts, uncles, cousins, and friends.

The family of Todd Allen Westerbuhr created this Life Tributes page to make it easy to share your memories.

A Private Family Funeral Service for Todd was held on Monday,...

Send flowers to the Westerbuhr family.