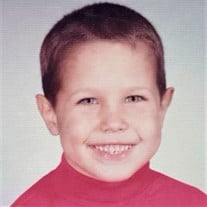 Thomas James Bartak was born on February 27, 1966 to Jack and Janet Bartak at Fillmore County Hospital in Geneva, Nebraska – it was in the same hospital that he passed away peacefully on May 30, 2021 at the age of 55 years, 3 months and 4 days. Although Tom wasn’t able to venture out of his home at the Fillmore County Hospital, his presence was felt far beyond its walls. Those who cared for, visited, prayed for or read about Tom, had their hearts touched by him in a subtle way as he showed acceptance of his fate and was a great example of demonstrating trust in God’s will. He will be greatly missed. Tom’s early years were joyful. As the youngest of five children, he received special attention with his cute smile and happy demeanor. Many family pictures show him grinning from ear-to-ear as he posed for the camera. Tom, and his one-year-older brother Stan were frequent partners in mischief, and Tom would giggle with orneriness when one of their pranks was successful. Tom and Stan often stayed at neighbor Mrs. Kral’s house during the parents’ working hours. They enjoyed playing together and eating Mrs. Kral’s rosettes. For some reason, Tom didn’t like buttons, and he sometimes exerted his precocious influence when Mrs. Kral greeted them at the door wearing a dress with buttons, he’d insist that she change, or he wouldn’t go into the house. Tom’s lighthearted life changed in an instant on June 26, 1972. On that hot summer afternoon, he and his brother Stan were involved in a car accident which took the lives of three people, including his grandmother Anna Mueller, and severely injured his uncle Richard Mueller, as well as himself, his brother and their step-cousin. First reports of the injuries from the crash placed Stan in the most serious condition with multiple lacerations of his face and eye requiring hundreds of sutures. Tom was reported to be “only” unconscious and all expected him to wake normally very soon. However, after two brain surgeries and treatment by doctors from the Mayo Clinic, it became apparent that Tom had suffered severe brain damage in the crash on Highway 81. Tom would spend the next forty-nine years of his life in care at the Fillmore County Hospital. All those dear to Tom are so thankful for the compassionate and loving care given by the nurses, doctors and staff at the hospital over the years, starting with nurse and close family-friend Joyce Schlegel and Tom’s sister, Patty Korbelik, R.N., along with his mother Janet Bartak. In the only way that he could, with smiles, coos and, at times, movements of his eyes, Tom connected with his family and caregivers. Even in his helpless state, he was able to communicate joy and impart a sense of gratitude to those at FCH who helped him through the daily tasks of eating, teeth brushing, shaving, bathing and the like. He expressed love to his family and friends as they visited his room which had a view of the freedom of the blue sky that he is only now feeling again after so many years away from the playground of his childhood. In some ways, we all lost the Tom that we knew before that day in 1972, but we also gained a new son, brother and child to care for. Tom’s steadfastness through the long days and nights, showed us what perseverance can look like. His greeting smile showed us that the joy, that he displayed as a toddler, was still there looking up from his bed, and that contentment can be experienced in many ways. Tom’s trust in those around him, and in God, showed us the real meaning of faith to which he was baptized in St. Joseph’s Church. Tom is survived by his mother Janet Bartak of Geneva; brother Jeff Bartak and wife Smriti Srinivas of Davis, California; sister Pam Haverland and husband Zsolt of Savannah, Georgia; sister Patty Korbelik and husband Dale of Crete; and brother Stan Bartak and wife Kim of Omaha; along with many cousins in Nebraska, California, Georgia and Colorado. He was preceded in death by his father Jack Bartak. A Funeral Mass for Tom was held on Tuesday, June 1, 2021 at 10:30 a.m. at St. Joseph Catholic Church in Geneva. A Rosary was prayed at 10:00 a.m., prior to the Mass. Judy Rada accompanied Geriann Rada in the singing of “Be Not Afraid,” “You Are Mine,” “On Eagles’ Wings,” “Song Of Farewell,” and “Go In Peace.” Pallbearers for the service included Jeff Bartak, Stan Bartak, Carson Bartak, Jackson Bartak, Derek Korbelik, and Jarod Korbelik. Tom was cremated following the Funeral Mass and his ashes will be placed in the St. Joseph Catholic Cemetery. Farmer & Son Funeral Home was in care of the arrangements and online condolences can be left at https://www.farmerandsonfuneralhome.com/ Memorials are suggested to the St. Joseph Catholic Church.

Thomas James Bartak was born on February 27, 1966 to Jack and Janet Bartak at Fillmore County Hospital in Geneva, Nebraska &#8211; it was in the same hospital that he passed away peacefully on May 30, 2021 at the age of 55 years, 3 months and... View Obituary & Service Information

The family of Tom Bartak created this Life Tributes page to make it easy to share your memories.

Send flowers to the Bartak family.