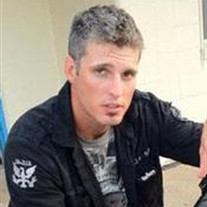 Graveside services for Trenton will be held on Friday, October 25, 2013 at 11:00 a.m. at the Fairmont Cemetery. Pastor Bill Switzer will be officiating the services. Public Visitation will be held on Thursday from 1:00 p.m. to 8:00 p.m. at the Farmer & Son Funeral Home in Geneva. Memorials are directed to the family. Trenton Charles McDaniel was born to Richard Leland McDaniel and Gina Marie (Kinley) McDaniel on July 20, 1983, at Hastings, Nebraska, and passed away on October 20, 2013 at Forman, North Dakota at the age of 30 years and 3 months. He was one of two children born in the family. Trent attended school in Fairmont, Nebraska. After high school, he lived in Garland, Texas for a time. Trent moved back to Nebraska and worked for several different construction companies. He then began working for Village Inn in 2006 and worked his way up to assistant manager. In September of 2012 he began employment with Longfellow Foundations, Inc., and he was still working there at the time of his death. Trent’s son, Treavar Chase, was born on January 21, 2001. Trent was married to Megan N. Ramsey of Lincoln, Nebraska on October 31, 2009 in Fairmont, Nebraska. Trent was interested in anything mechanical, computers, art, science and astronomy. He also enjoyed working out, tattoo art, and his newest passion was his Harley Davidson motorcycle. He was in the process of repainting it and putting new decals on it so that he could get it on the road. He also just purchased a new leather motorcycle jacket for riding. Trent also loved tinkering with car engines, and he was very good at it. He also enjoyed working with computers. He was self taught on the computer and he kept the family computers all running smooth. Trent was always willing to help out his family. He enjoyed mowing and helping in the yard. He recently helped his mother plant trees and flowers. Trent will be missed by all that knew him. Trent was preceded in death by his uncle Kevin Kinley; great grand parents Adalin & Warren Sanburn; grand parents Robert & Shirley Benorden; grandfather Bernard E. Kinley; and uncle Gary Kness. He is survived by his son Treavar Pekar; wife Magan McDaniel; mother Gina McDaniel; twin brother Turner McDaniel; aunt Deb (Kness) Novak and husband Tom.

Graveside services for Trenton will be held on Friday, October 25, 2013 at 11:00 a.m. at the Fairmont Cemetery. Pastor Bill Switzer will be officiating the services. Public Visitation will be held on Thursday from 1:00 p.m. to 8:00 p.m.... View Obituary & Service Information

The family of Trenton Charles McDaniel created this Life Tributes page to make it easy to share your memories.

Graveside services for Trenton will be held on Friday, October...

Send flowers to the McDaniel family.