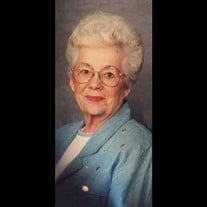 Treva Mae Perkins was born to Willard Thomas & Nina Fern (Baker) Hall on November 28, 1927 at McCool Junction, Nebraska, and passed away on September 28, 2017, at York General Hearthstone in York, Nebraska at the age of 89 years, 10 months. She was one of 7 children born in the family. Treva graduated from McCool Public Schools in May of 1945. She then received her teaching certificate and taught at country school for a brief time. On May 20, 1947 she married Dean Perkins of Fairmont and to this union five children were born: Ron, Rex, Marla, Roger, and Gayla. Treva and Dean raised their family in the McCool Junction area and moved to York in 2006. She was a member of the United Methodist Church in McCool Junction. Treva had a big heart and welcomed everyone into her home. She loved to show others how to bake, cross-stitch, crochet, and was quite the teacher when it came to fishing out at the pond or nearby river. She was one of the best cooks and was well known for her rolls, pies, and everything in between. So many memories sitting around the kitchen table drinking coffee, eating crackers and butter, or candy from the always stocked candy drawer. Halloween was a favorite holiday just to see if her and Dean could come up with a way to outsmart the grandkids every year…they always succeeded! She spent many years doing a variety of crafts, Vacation Bible School, and raising her family before going back to work as a cook at Fairview Manor, and then at McCool Public Schools. She was always up for the challenge of a good jigsaw or crossword puzzle. She loved watching sporting activities that her grandkids and great grandkids were involved in. Her 59 grandchildren, great grandchildren, and great-great grandchildren brought her great joy. She truly loved nothing better than snuggling a new bundle of joy; something she got to do many, many times. Her greatest joy in life was her family. She was loved dearly and will be deeply missed. Treva was preceded in death by her parents Willard & Fern; husband Dean; granddaughter Kristy Perkins; and brothers Vernon Hall and Norman Hall. She is survived by her sons Ron & Clare Perkins of McCool Junction, NE, Rex & Janet Perkins of Fairmont, NE, and Roger & Cindy Perkins of Shelby, NE; daughters Marla & Alan Chrisman of McCool Junction, NE and Gayla & Terry Knight of York, NE; brothers Roland & Anna Marie Hall of McCool Junction, NE and Gary & Nancy Hall of York, NE; sisters Phyllis & Jerry Bickert of Lincoln, NE and Marilyn & Jim Carroll of Columbus, NE; sisters-in-law, Marjorie Eaton of Commerce City, CO and Donna & Dale Isaacs of Bozeman, MT; brother-in-law, Richard Durham of Geddes, SD; 14 grandchildren, 21 great grandchildren, 2 great great grandchildren, 5 step-grandchildren and 17 step-great grandchildren; and by many nieces and nephews. A Funeral Service for Treva was held on Tuesday, October 3, 2017 at 2:00 p.m. at the United Methodist Church in McCool Junction. Pastors Ralph Gaines and Art Phillips officiated the service. Delores Bailey accompanied Lynn Hall who sang “Beyond The Sunset” and “Precious Lord, Take My Hand.” The recorded selection “On The Other Side” was played as a recessional song. Pallbearers for the service included Chad Chrisman, Troy Perkins, Cody Chrisman, Adam Perkins, Trent Chrisman, Braden Knight, and Devin Knight. Private Family Interment was held in the Fairmont Cemetery following the Funeral Service. Farmer & Son Funeral Home of Geneva conducted the services. Online condolences may be left at www.farmerandsonfuneralhome.com. Memorials are suggested to the family for future designation.

Treva Mae Perkins was born to Willard Thomas & Nina Fern (Baker) Hall on November 28, 1927 at McCool Junction, Nebraska, and passed away on September 28, 2017, at York General Hearthstone in York, Nebraska at the age of 89 years, 10 months.... View Obituary & Service Information

The family of Treva M. Perkins created this Life Tributes page to make it easy to share your memories.

Send flowers to the Perkins family.