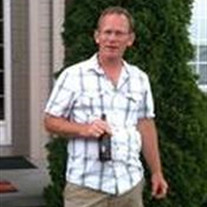 Troyce Paul Bridger was born to James Jackson Bridger and Janet Rose (Rott) Bridger on Friday, December 13, 1968 at 12:07am at the Hospital in Crete Nebraska attended by Dr. Robert Quick, and named for his great uncle Mr. Troyce Smith, was called home to our Savior on Saturday, June 23, 2012 in Bronson, Kansas at 5:05 pm at the age of 43 years. He was the fifth of seven children born to Jack and Janet. Troyce’s adventures in poultry, livestock, work, and play took him around the country and world, but he always considered himself a lifetime resident of his hometown Crete, Nebraska. He graduated in 1987 from Crete Jr/Sr High School, and attended the University of Nebraska-Lincoln and Doane College. Troyce or Troy as he was often called, was a modern day horse trader. Whether you were looking for the best tile or tool, partridge Cochin bantam rooster, or who had the best Dorset wether lambs, he was the guy who could help you find what you wanted at a good price. The world held no strangers for Troy, there were only deals he had not yet made or new friends he was always happy to help…it seemed like he knew everyone. Troyce was preceded in death by his grandparents James Hurssell and Pauline Elizabeth (Jackson) Bridger of El Dorado Springs, Missouri; as well as, Bohumil (Barney) and Hope (Bartunek) Rott of Grand Island, Nebraska. He is survived by his parents James and Janet (Rott) Bridger of Crete; and the following Siblings, Nieces, and Nephews: Rose Marie Bridger-King of Crete, Khrystal (King) and James Harrod of Crete, Ashley King of Lincoln, Jaymes King and Annie Hill of Corpus Christi, Texas; James (Jim) Bridger, and children Amanda, Mykayla, Katelyn, and James Bridger of Gainesville, Texas; Jodie (Bridger) Jasper and Larry Olena of Geneva, Dillon Jasper and Niki Willard of Lincoln, Dustin Jasper and Kristine Filkins of Crete, Abbie and Macie Jasper of Geneva; Sherol (Bridger) and Dave Rankin with their son Benjamin Rankin of Elkhorn; Julie (Bridger) Viger and children Aaron, Casey, Donavin, and Evan Viger of Crete; Jennifer Bridger with her son Nigel Bridger of Crete; 6 Great Nieces and Nephews, Carter, Cayden, Paytin, Jazmin, Maci, and Karsin; As well as numerous Aunts, Uncles, and Cousins. A Celebration of Life Service will be Friday at 2:00 p.m. at the Heckman Auditiorium on the Doane College Campus, Crete, Nebraska. A Remembrance Service will be held on Thursday at 8:00 p.m. at the Sacred Heart Catholic Church in Crete. Interment will be in the Riverside Cemetery in Crete. Visitation will be Friday from 9:00 a.m. until noon at the Kuncl Funeral Home in Crete.

Troyce Paul Bridger was born to James Jackson Bridger and Janet Rose (Rott) Bridger on Friday, December 13, 1968 at 12:07am at the Hospital in Crete Nebraska attended by Dr. Robert Quick, and named for his great uncle Mr. Troyce Smith, was called... View Obituary & Service Information

The family of Troyce Paul Bridger created this Life Tributes page to make it easy to share your memories.

Send flowers to the Bridger family.