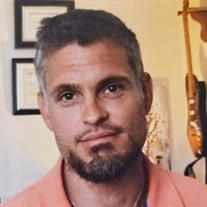 Private Family Services will be held for Turner. Burial will be held at the Fairmont Public Cemetery in Fairmont, Nebraska. Memorials are to be directed to the family to be designated at a later date. Memorials may be mailed to The Family of Turner McDaniel, P.O. Box 547, Fairmont, NE 68354. Turner Roy McDaniel was born on July 20, 1983, to Gina (Kinley) McDaniel Johnson in Hastings, Nebraska. Turner passed away December 25, 2020 in Eureka, California at the age of 37. He attended Grade School, Jr. High and High School at Fairmont Public Schools. Turner worked various jobs in Geneva, York and Lincoln. Turner married Krista Kapperman and two children were born from that union, Kinley and Krya McDaniel. Turner worked alongside his twin brother, Trenton and friends at Longfellow Construction. Turner married Megan (Ramsey) McDaniel on July 7, 2014. Turner and Megan moved to Loveland, Colorado where Turner worked as a welder at Black Eagle. Turner later worked alongside his wife at S.N.K. Construction. They then moved to Clarkston, Washington, where they welcomed their daughter, Tenley. While in Clarkston, He and Megan worked alongside each other at Northland Exteriors, LLC. Turner attended a yearlong discipleship program, Life Changers Outreach, in Washington where he found faith and his calling. Turner then moved his family to Eureka, California to attend Bethel School of Supernatural Discipleship (BSSD) where he completed one year and earned his Ministry Certificate. Turner and Megan again worked alongside each other at Waterfront Recovery Services helping others through their addictions. Turner loved his family, especially his daughter, Tenley. Turner was proud of Tenley and enjoyed taking her for walks, reading to her, playing horse, giving her big Daddy hugs and tucking her in at night. The family loved dining out, walking in the Redwoods, and spending time at the beach. Turner had a passion for the rodeo and enjoyed the thrill of bull riding. Turner spent three summers riding bulls in rodeos in Nebraska. Turner enjoyed reading, debating, talking politics, and philosophy, working out, and was an amazing guitar player. Turner is preceded in death by his twin brother Trenton, Grandparents Robert and Shirley Benorden, Uncle Kevin Kinley, Uncle Gary Kness, and Great Grandparents Adalia and Warren Sanburn. Turner is survived by his wife, Megan, daughter Tenley, son Kinley, daughter Kyra, his mother Gina Johnson and husband Rick, Aunt Deb and husband Tom Novak.

Private Family Services will be held for Turner. Burial will be held at the Fairmont Public Cemetery in Fairmont, Nebraska. Memorials are to be directed to the family to be designated at a later date. Memorials may be mailed to The Family... View Obituary & Service Information

The family of Turner R. McDaniel created this Life Tributes page to make it easy to share your memories.

Private Family Services will be held for Turner.

Send flowers to the McDaniel family.