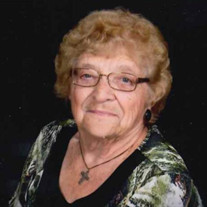 A Mass of Christian Burial for Val Jean will be held on Friday, May 6, 2022 at 10:30 a.m. at St. Joseph Catholic Church in Geneva, Nebraska with Father Harlan Waskowiak presiding. Praying of the Rosary will be held at 10:00 a.m. on Friday, May 6, 2022 at St. Joseph Catholic Church in Geneva, Nebraska. Visitation will be held on Thursday, May 5, 2022 from 1:00 p.m. until 8:00 p.m. with family present from 5:00 p.m. until 7:00 p.m. at Farmer & Son Funeral Home in Geneva, Nebraska. Graveside Services will be conducted following the funeral mass in the St. Joseph Catholic Cemetery in Geneva, Nebraska. Memorials are to be directed to St. Joseph Catholic Church. Livestream will begin by 10:00 a.m. on Friday for the Praying of the Rosary and continue on through the Funeral Mass. To view the Livestream Video you can go to Farmer & Son Funeral Home's Facebook Page or in your search engine type @friendlyfuneraldirectors and click the link to Farmer & Son or click this link https://www.facebook.com/friendlyfuneraldirectors/Funeral and it should direct you to our Facebook Page. Val Jean (Steiger) Reinsch was born to Freda (Issler) Steiger and Max Steiger on February 14, 1932 in rural Fillmore County and passed away on May 2, 2022 at her home at the age of 90 years. She was number 11 out of 14 children born to Freda and Max. Val or Val Jean as most people called her, was raised on a farm in Fillmore County. She attended Sutton High School and graduated with the class of 1949. After graduation she worked as a waitress at a café in Sutton and played first base on the town softball team. She met her husband, Francis, on a blind date set up by her brother. They were married on October 10, 1951 at Turkey Creek. Francis was drafted into the United States Marines and they were stationed in San Diego, California. After his deployment to Korea, she moved back to Nebraska and lived with her sister. To this union, 4 little girls were able to grow up on a farm and found out what hard work was all about. After years of helping Francis on the farm they bought a house in Geneva in 1981. In her spare time, she worked as a bartender at the VFW in Geneva and the American Legion in Sutton. She was a member of the St. Joseph Alter Society, American Legion Auxiliary and VFW Auxiliary. When it came to kids, grandkids or great-grandkids, Grandma kept the peace and discipline with a yard stick. Every kid has met up with that yard stick, if not once, more than once at Grandma’s house. She loved going to her cabin at the lake where she went every summer for 27 years. She made many friends there and had a few wild golf cart rides. Going to the Phillipsburg Rodeo was a yearly event for the family. She managed to get the family together and all to wear matching shirts. She attended the rodeo for 40 years. She is preceded in death by her husband, Francis: her parents; 13 brothers and sisters; 2 great granddaughters and 1 great-great granddaughter. Val Jean is survived by her daughters, Donna Fogo and husband, John of Clay Center, Nebraska, Vickie Runyon of Phillipsburg, Kansas, Janet Kempf and husband, Mark of Shickley, Nebraska, Jacquie Moulton and husband, Tom of Alma, Nebraska; sister, Deanna Thornberg of Loveland, Colorado; 13 grandchildren; 34 great grandchildren and 4 great-great grandchildren.

A Mass of Christian Burial for Val Jean will be held on Friday, May 6, 2022 at 10:30 a.m. at St. Joseph Catholic Church in Geneva, Nebraska with Father Harlan Waskowiak presiding. Praying of the Rosary will be held at 10:00 a.m. on Friday,... View Obituary & Service Information

The family of Val Jean Reinsch created this Life Tributes page to make it easy to share your memories.

A Mass of Christian Burial for Val Jean will be held on Friday,...