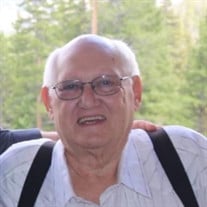 A Memorial Service for Valdean will be held on Wednesday, October 6, 2021 at 11:00 a.m. at the United Methodist Church in Shickley, Nebraska with Pastor Cesar Duran presiding. No Visitation - Cremation. Memorials are to be directed to the family to be designated at a later date. A private family inurnment will take place at a later date. Valdean K. “Dutch” Kopke was born to Eilet G. and Florinda C. (Bauer) Kopke on July 1, 1941 at David City, Nebraska, and passed away September 30, 2021 at his home in Shickley, Nebraska at the age of 80. He was the only child in the family. Valdean “Dutch” was raised on a farm outside of Rising City, Nebraska. He helped his father and uncles on the farm from the time he was able to until he went off to college. Valdean graduated from Rising City Public Schools and then attended Lincoln School of Commerce where he graduated in 1960 with his degree in accounting. Valdean was married to Carol Springer of Hastings, Nebraska on January 31, 1985. Valdean worked many years in accounting at Kerrco before Centennial Plastics bought out Kerrco. He remained at Centennial Plastics until he retired in July of 2011 with 50 years of service. He was a member of the Izaak Walton League. He was also a member of the Nebraska Game and Parks, where he taught hunter safety courses. Valdean was a 40-year member of the Fraternal Order of Eagles. Also, a member of the NRA. Valdean loved to be outside doing numerous things; hunting, fishing, going to ball games and hanging with his kids and grandkids. He was preceded in death by his parents. Valdean is survived by his wife, Carol of 36 years. Left to honor his memory are his kids; Rick (Sally) Kopke, Linda (Corey) Nellson, Chris (Erin) Springer, Shawn Springer and Brett (Amy) Springer. Grandchildren; Kara (John) Danforth, Patrick Kopke, Brandon (Adrienne) Springer, Austin (Hunter) Springer, Dalton Springer, Brooke Kamler, Jerzey Springer, Tanner Springer, Logan Springer, Carson Springer, Collin Springer and Cash Springer. Great grandchildren; Alana Lipker and Lilly Danforth.

A Memorial Service for Valdean will be held on Wednesday, October 6, 2021 at 11:00 a.m. at the United Methodist Church in Shickley, Nebraska with Pastor Cesar Duran presiding. No Visitation - Cremation. Memorials are to be directed to the... View Obituary & Service Information

The family of Valdean K. Kopke created this Life Tributes page to make it easy to share your memories.

A Memorial Service for Valdean will be held on Wednesday, October...

Send flowers to the Kopke family.