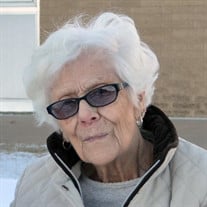 A Funeral Service for Vera will be held on Tuesday, October 3, 2017 at 10:00 a.m. at the Prince of Peace Lutheran Church in Geneva, Nebraska with Pastor Jim Germer officiating. Visitation will be held on Monday, October 2, 2017 at Farmer & Son Funeral Home from 1:00 p.m. until 8:00 p.m. with the family present from 4:00 p.m. until 6:00 p.m. Graveside Services will be conducted at the Geneva Public Cemetery. In Lieu of Flowers - Memorials are to be directed to the family for a later designation. Vera Maurine (Schweitzer) Lichti was born to Lloyd Schweitzer and Katie Springer on September 15, 1925 near Carleton, NE and passed away September 28, 2017 at Heritage Crossings in Geneva Nebraska at the age of 92. She was one of 17 children in the family. Vera attended country school through the eighth grade, at which time she helped out with the family. Vera and Reuben Lichti were married on January 1st, 1947 and had one daughter, Pamela. They also lost one boy prior to birth. Shortly after marriage, Vera and Reuben moved to Martland where they ran the grocery store. They later moved to Bruning and finally to Geneva where they lived the remainder of their lives. Vera and Reuben owned and operated Lichti Auto Supply in Geneva for over 40 years. Outside of work, Vera had a love for flowers, yard work, birds and sitting on her front porch swing and hosting family and friends around her table. She had great joy spending time with her great-grandchildren, and just the mention of their names brought a big smile to her face. Vera was preceded in death by her husband Reub of 44 years; daughter Pamela Eberly and son in law David Eberly; her parents Lloyd and Katie Schweitzer, step mother Dorthy Schweitzer, sisters Bernetta Swartzendruber, Alberta Bruning, and Betty Kennel; brothers Everett Schweitzer and Edward Schweitzer; two infant sisters and two infant brothers, brothers-in-law Paul Bruning, Virgil Swartzendruber, Donald Roth and Robert Kremer; and sister-in-law Marcia Schweitzer. She is survived by her granddaughter Stacey; grandson John and wife Marion; great-grandchildren Amelia and Leo, all of Seattle, Washington. Sisters Marge Kremer of Omaha and Mary (Jerry) Stutzman of Phoenix, Arizona. Brothers Clint (Marilyn) Schweitzer of Geneva, Galen (Joan) Schweitzer of Lincoln, Nick (Kit) Schweitzer of Fort Wayne, Indiana, Ron (Judy) Schweitzer of Auburn, Indiana, and John (Diane) Schweitzer of Lincoln, brother in law Wayne Kennel of Geneva; sister in laws Doris Lichti of Geneva and Laurine Schweitzer of Bruning, nieces, nephews and many friends. The family of Vera would like to give a special thanks to Heritage staff; your kindness and caring will not be forgotten.

A Funeral Service for Vera will be held on Tuesday, October 3, 2017 at 10:00 a.m. at the Prince of Peace Lutheran Church in Geneva, Nebraska with Pastor Jim Germer officiating. Visitation will be held on Monday, October 2, 2017 at Farmer &... View Obituary & Service Information

The family of Vera M. Lichti created this Life Tributes page to make it easy to share your memories.

A Funeral Service for Vera will be held on Tuesday, October 3,...