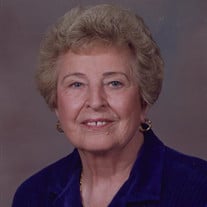 Vera Mae (DuBois) Messman of Geneva, Nebraska, formerly of Strang, was born to George C. and Bessie O. (Bumgarner) DuBois on a farm near Strang on July 17, 1920. She passed away on January 20, 2017 at Heritage Crossings in Geneva, at the age of 96 years, 6 months, 3 days. Vera was baptized on October 4, 1920, at the United Brethren Church, Strang, Nebraska. She attended Country School District #57 and Strang High School for two years. She transferred to Geneva High School to take normal training courses and graduated with the Class of 1937. Vera married Lowell Messman on August 11, 1939. They settled in Strang where Lowell ran Messman Produce. When Lowell left for the war they closed up their produce and their home and Vera went to live with her parents. She did a variety of jobs helping various family members and waitressed for a time in Carleton, Nebraska. After Lowell’s return from the service, they resumed their produce business and later branched out into farming. They were blessed with two sons, Larry and Jerry. Upon retirement, in 1977, they built a new home in Geneva, Nebraska. Vera had many interests and hobbies. A major part of her life was spent at baseball games, starting with her honeymoon at the World Series in St. Louis. She followed games for her husband and both sons. She kept busy with her homemaking, with a particular talent for cooking. She loved to cook and entertain in her home and was well known for her fantastic dinners, anniversary and birthday parties, Thanksgivings and harvest meals. She was an avid flower gardener and was many times the first to obtain a particular new variety of flower or shrub. Vera was a 60+ year member of the First Congregational United Church of Christ where she taught Sunday School, Bible School, sang in the choir and served in various capacities for the Women’s Fellowship. She was a charter member of the Strang Sewing Club, which she helped organize over 70 years ago. This club still meets today. She was a member of the Hospital Auxiliary and Legion Auxiliary. Vera loved music and played the piano and organ. She and Lowell spent a lot of time attending any Big Band era dances they could find. She found great enjoyment when she led the Senior Center Kitchen Band for 10 years. The band performed all over the state, the State Fair and regularly entertained at Heritage. Vera moved to Heritage Crossings on July 27, 2007. Visits from her grand children and great-grand children delighted her. She participated in all of the activities available to the residents and enjoyed the many visits by local school children. Vera was preceded in death by her parents George and Bessie DuBois, her husband, Lowell, brothers and sisters-in-law Leland and Louise DuBois, Kenneth and Eileen DuBois, sister Evelyn Wheat Marcopolus, brothers-in-law Les Wheat and Peter Marcopolus, and nephew Richard Wheat. She is survived by her sons Larry and wife Lavonne of Lincoln, Nebraska, and Jerry and wife Marla of Ft. Collins, Colorado; three grandchildren Terri and Derrick Moore and sons Nathan and Quinn of Oxford, Ohio, Mick and Janet Messman and daughters Elizabeth and Audrey of Waukee, Iowa, and Randy and Jessica Messman and children Halle, Mckenzie, and Ava Messman, Tristen and Taylor Schimmel of Ft. Worth, Texas and Vera Mae’s namesake Ella Mae to be born in March; step-grand daughter Andrea Potter and Joe Potter, and daughters Madelynn, Claire and Ellayna of Ft. Collins, Colorado; and step-grandson Ryan and Carla Lauenstein and children Tyler, Whitney, Gracie and Hallie of Waverly, Nebraska; cousins, numerous nieces, nephews, and friends. Funeral services for Vera were held on Saturday, January 28, 2017 at 10:30 a.m. at the First United Congregational Church Of Christ in Geneva. Pastor Diane Ryder officiated the service. Cherie Domeier provided the prelude and postlude music. The recorded selections “Heaven’s Garden,” “In The Garden,” and “Take My Hand, Precious Lord” were played during the service. Pallbearers for the service included Mick Messman, Randall Messman, Derrick Moore, Roland Kassebaum, Dayle DuBois, Ron Morlan, and Casey Head. Interment was held in the Geneva Public Cemetery Following the Funeral. Memorials are directed to the Fillmore County Hospital Auxiliary or the First United Congregational Church Of Christ. Farmer & Son Funeral Home conducted all services. Online condolences may be left at www.farmerandsonfuneralhome.com

Vera Mae (DuBois) Messman of Geneva, Nebraska, formerly of Strang, was born to George C. and Bessie O. (Bumgarner) DuBois on a farm near Strang on July 17, 1920. She passed away on January 20, 2017 at Heritage Crossings in Geneva, at the age... View Obituary & Service Information

The family of Vera Messman created this Life Tributes page to make it easy to share your memories.

Send flowers to the Messman family.