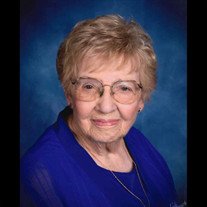 Vera was born January 25, 1922 to Albert and Erma (Preston) Baller. She passed away at York General Hospital on November 2, 2021 at the age of 99 years. She was a life-long learner and educator, beginning her teaching career at 18 years old and continued until her retirement in the late 80’s from McCool Public Schools. Her role as an educator continued as a volunteer with Bluebirds Across Nebraska. She was a strong supporter of the community, church, and school. She was a fan of all sports, but baseball held a special place because she played ‘work up’ at a very early age. She married Charles Underwood on February 11, 1945 and they were blessed with three children: Paul, Sylvia, and Carol. Charles died in 1979 and several years later Vera met and married Merlin Rauscher, her soulmate. She is survived her children: Paul (Cheri) Underwood, Sylvia (Dave) Tyser, and Carol Farnham; her grandchildren: Jack Farnham, Ryan Underwood, Ben (Maddy) Underwood, and Molly (Ismatt) Underwood Niazi; her great grandchildren: GiGi and Goldie Underwood, and Rumi Underwood Niazi; her stepdaughter: Rita (John) Bartzatt and Rita’s children: Jerry (Pauline) Scott, Shelly (Todd) Burklund, and Chris Bartzatt. She was preceded in death by her husbands, her parents, sister, brother, sisters-in-law, brothers-in-law, and son-in-law, Norm Farnham. A Memorial Service was held on Monday, November 8, 2021 at 11:30 AM at the United Methodist Church in McCool Junction, Nebraska. Pastor Monical Magoola presided over the Memorial Service. Delores Bailey provided instrumental renditions of “Amazing Grace,” “Just A Closer Walk With Thee,” “On Eagle’s Wings,” and a “Polka Medley” at the end. Paul Underwood, Jack Farnham, Ryan Underwood and Ben Underwood each spoke at the Memorial Service. There was private family Graveside Service for Vera in the Exeter Cemetery and she was placed next to her first husband, Charles. Farmer and Son Funeral Home was in care of the arrangements and online condolences can be left at www.farmerandsonfuneralhome.com. Memorials are directed to McCool Community Improvement Foundation or McCool United Methodist Church.

Vera was born January 25, 1922 to Albert and Erma (Preston) Baller. She passed away at York General Hospital on November 2, 2021 at the age of 99 years. She was a life-long learner and educator, beginning her teaching career at 18 years old... View Obituary & Service Information

The family of Vera Underwood Rauscher created this Life Tributes page to make it easy to share your memories.