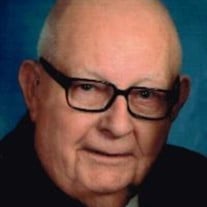 A Public Graveside Service for Vernon will be held on Friday, December 18, 2020 at 11:00 a.m. at the Swedish Cemetery in rural Shickley, Nebraska with Reverend Bryan Drebes presiding. No Public Visitation will be held. Military Rites will be conducted by the Nebraska Military Honor Guard for Vernon's service in our United States Air Force. Memorials are to be directed to LCMS Mission Central - 40755 County Highway East 16, Mapleton, IA 51034. Vernon Harry Pearson was born April 23, 1932 in Hastings, Nebraska. He attended school in Shickley, graduated from Shickley and worked on the family farm. He entered the US Air Force in 1950. He was stationed in Denver, CO and Topeka, KS, where he was an airplane electrician. Vernon married Elaine Kerl in 1953. After leaving the Air Force, they started a farm near Shickley. They raised two sons, Jon and Erik. Vernon was involved in local and state politics as a member of the State Crime Commission, Little Blue Natural Resources District, the Environmental Control Council and over 20 years on Fillmore County Board. Vernon and Elaine were members of Zion Lutheran Church in Shickley, where Vernon served on the Board of Elders. In 2000, Vernon and Elaine moved to Omaha to be closer to their children and grandchildren. They joined Pacific Hills Lutheran Church where they participated in Bible study and 55 and Better. They also enjoyed travel to China, Israel, Alaska, Ireland and Canada. After Elaine’s death, he moved to Lakeside Village Vernon was preceded in death by his wife Elaine, son Jon, and his parents Harry and Lillian and his sister Eloise. He is survived by his son Erik, grandchildren Catherine, Jacob, and Anna, and his daughter-in-law Sue.

A Public Graveside Service for Vernon will be held on Friday, December 18, 2020 at 11:00 a.m. at the Swedish Cemetery in rural Shickley, Nebraska with Reverend Bryan Drebes presiding. No Public Visitation will be held. Military Rites will... View Obituary & Service Information

The family of Vernon H. Pearson created this Life Tributes page to make it easy to share your memories.

A Public Graveside Service for Vernon will be held on Friday,...

Send flowers to the Pearson family.