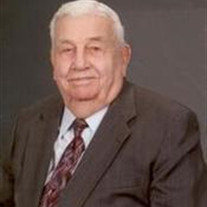 Vernon Ernest Schoenbeck age 88 years and 9 months of rural Tobias went to his heavenly home on Monday, October 1, 2012. He was born at home on the farm west of Western, Nebraska on December 31, 1923, to William and Maria (Meyer) Schoenbeck. He was baptized on January 27, 1924, at Zion Lutheran Church rural Tobias, Nebraska by Pastor E.O. Potratz and confirmed April 10, 1938, by Pastor William Nau. His confirmation verse was Rev. 2:10. He attended Zion Lutheran Parochial School thru the 8th grade and continued on with high school at the Tobias Public School, graduating with the class of 1942. He attended his 70th high school reunion this year. Vernon served in the United States Army from February 1946 thru June 1946 when he was honorably discharged due to his mother’s failing health from cancer. Vernon married Verda Henk on April 27, 1946, in the parsonage of the St. John’s Evangelical Church in Western, Nebraska by Pastor H.H. Henning. They were blessed with two daughters, Judy and Jean. He was a man of faith being a life time member of Zion Lutheran Church where he served over the years as an elder, congregation chairman, school board president, taught Sunday school and Bible class and sang base in the choir for years. He was a member of the Lutheran Laymen League. He farmed all his life on the family farm and especially enjoyed working with his cattle. Vernon and Verda were presented with the Nebraska Pioneer Farm Award in 2002. Vernon was an avid fisherman, he liked to bowl and was a sport enthusiast who followed his 5 grandkids, who excelled in basketball, football, volleyball, baseball and softball. Baseball and softball was his special love. You would always see him and Verda sitting in their red van at all the local games. Later in life you would find him in his machine shed tinkering and inventing ways to fix anything broken. Also he and Verda enjoyed playing cards with friends and family. One of the last things on his bucket list was to take his grand and great grandkids thru the 125th Daykin Celebration Parade, which he did. His banner read: 62 year old tractor, ”Old Still Has A Future: 88 year old driver: 66 years of marriage. He will be remembered as a “stranger to no one” because of his ability to start up a conversation with anyone. He had a knack for telling stories and making you laugh with his witty humor. He had a love of music, was an excellent singer, enjoyed playing the harmonica and yodeling for his grand and great grandchildren. Vernon was preceded in death by his parents, brother, Edwin Schoenbeck and wife Lydia, sister Iona Bartels, brother-in-law, Boyd Henk and wife Alta, sister-in-law JoAnn Meyer and husband Merle and brother-in-law Earl Ziemann. He is survived by his wife of 66 years, Verda, daughters and sons-in-law Judy and husband Jim Stewart of Western, NE, Jean and husband Jack Sobotka of Daykin, Ne, grandchildren, Jeff Stewart and fiancé Holly Barta of Western, Jason Stewart and wife Jill of Daykin, NE, Scott Sobotka and wife Wendee of Tobias, Ne, Matt Sobotka and wife Renee of Lincoln, NE and Tami Filipi and husband Neal of Tobias, NE. Great grandchildren Natalie Barta, Cheston and Kyson Stewart of Western, NE, Jaala and Jetta Stewart of Daykin, NE, Jaicee, Josiee and Jaylee Sobotka of Tobias, NE, Morgan and Mason Sobotka of Lincoln, NE and Taelyn & Kendall Filipi of Tobias, NE. Brothers-in-law Walter Bartels of Albuquerque, NM and Ronnie Henk and wife Elaine of Williamsburg, VA and host of nieces, nephews and friends. He will be truly missed by all. Funeral services will be held 10:30 a.m., Friday, October 5, 2012, at the Zion Lutheran Church, rural Tobias, Nebraska. Intement will be in the church cemetery. Visitation will begin 1 p.m. until 8 p.m. on Thursday at the Farmer & Son Funeral Home-Kotas Chapel in Milligan. Memorials are to the Zion Lutheran Church.

Vernon Ernest Schoenbeck age 88 years and 9 months of rural Tobias went to his heavenly home on Monday, October 1, 2012. He was born at home on the farm west of Western, Nebraska on December 31, 1923, to William and Maria (Meyer) Schoenbeck.... View Obituary & Service Information

The family of Vernon E. Schoenbeck created this Life Tributes page to make it easy to share your memories.

Send flowers to the Schoenbeck family.