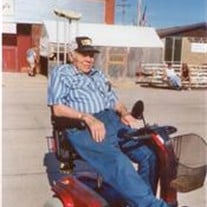 A Funeral Mass for Vince will be held on Monday, August 1, 2011 at 10:00 a.m. at the St. Helena's Catholic Church in Grafton, Nebraska. A Rosary will be held on Sunday night at 7:00 p.m. at St. Helena's. Visitation will be Sunday from 1:00 p.m. to 5:00 p.m. at Farmer & Son Funeral Home In Geneva. Memorials are directed to St. Helena's. Vincent Herman Yaeger was born to Michael & Anna (Reinsch) Yaeger on March 7, 1922 at Turkey Creek, Nebraska and passed away on July 27, 2011 in Geneva, Nebraska at Heritage Crossings Nursing Home at the age of 89 years, 4 months, and 20 days. He was one of 9 children in the family. He has two living siblings-Charlie who is 96 years old and lives in Pleasant Dale and Richard who is 91 and lives at Heritage Crossings. Vincent’s mother died in 1927 about 6 weeks after the birth of his youngest sister, and that was very difficult on the family. Times were hard back then and Vince says that the youngest children were placed with any relative or friend who could help his father care for the family. Vince said that even though that was difficult and things were hard for the family, a lot of folks back then went through the same things, so you just made things work as best you could. His father farmed for a living, renting a lot of different farms before finally ending up in the Grafton area. Vince went to country school about ten miles west of Geneva and graduated from Geneva High School in 1940. He always said school was okay and he was always proud that he completed it, but he preferred being outdoors hunting , fishing or working on the farm. Vince was drafted in 1942 into World War II, and he was on a mortar team during his service in the war. For his duty he received training in Australia and then he participated in combat in New Guinea and the East Indies before he received orders to ship out to the Phillipines for two landings. During his combat in the Philippines he was wounded on the second landing on May 7, 1945 and received a Purple Heart for his injuries. Vince related that he was injured in night combat and there were so many wounded that night that they were not able to get him off the beach until the next night. He spent 17 months at Fitzsimmons Army Hospital in Denver, Colorado recovering from his injuries. At that time, the medical profession did not have the technology needed to deal with his injury so his hip was fused, which led to life long mobility problems for him. When Vince was released from the Hospital, he weighed only 135 pounds. Upon release from the hospital, the government gave Vince $500 for his first car, a 1947 Oldmobile, which he added $500 of his own money and got auto-dimming headlights, air conditioning, and a spare tire. In 1951, Vince enrolled in Milford at the trade school and took training in the jewelry trade and graduated in 1953 and started a Jewelry store in Sutton with Sam Nelson who he met in school. In 1962 he sold out his half of the business to Sam to pursue his passion of raising livestock, farming, hunting and fishing. He continued to farm until the fall of 1982 when he retired. During retirement he went to Phoenix every winter for three months. His hobbies included hunting, fishing, going to places like Harlan County Lake, as well as other ‘good spots’ in Nebraska. He enjoyed going to the horse races in Grand Island and Omaha, and thoroughly enjoyed eating out and being with his friends the most. Vince moved into Heritage in August of 2009 and remained there until his death. Vincent was preceded in death by his parents; his siblings Joseph, Albert, Rosella, John, Agnes and Lillian. He is survived by his brother Charlie of Pleasant Dale, brother Richard and wife Dorothy of Sutton; nephews, nieces and cousins.

The family of Vincent H. Yaeger created this Life Tributes page to make it easy to share your memories.