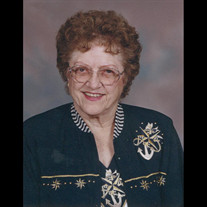 Violet Ruth Miller was born to Lloyd and Katie (Ulm) Goodman near Belvidere, Nebraska on January 16, 1924. She passed away on Wednesday, January 4, 2017 at Heritage Crossings Nursing Home in Geneva at the age of 92 years, 11 months, and 19 days. She was one of six children born in the family. In her youth, Vi enjoyed being outdoors, spending time with her cousin Lois and riding her favorite horse, Lady. Violet’s upbringing was not without grief, though, as her mother passed away when Violet was 4 years old. Vi’s father couldn’t care for all the children and they were divided amongst other family members. Vi ended up being raised by her uncle and aunt Henry & Sophia Eden, and she came to know them as her parents. Vi was baptized and confirmed at the Trinity Lutheran Church in Bruning, Nebraska. She attended County School District 49 for eight years before entering Bruning High School and graduating with the class of 1941. Soon after graduating high school, Vi doing housework for Earl and Pauline Hawks when she met a farmer from the Carleton area named Albert (Ab) Miller. They were married on January 16, 1942. Three children were born to this union: DeRoy, Sharon, and Betty. Ab & Vi made their home on the family farm north of Carleton raising crops and livestock. She was an active person and she wasn’t afraid to get her hands dirty on the farm. She kept the house and family in order, worked a large garden each year, and would help on the farm when asked. She also enjoyed bowling on a league team in Hebron for many years, horse race excursions to Fonner Park, cooking and sewing, and many bus trips and vacations with Ab in their later years. Many dinner and dance outings were also enjoyed at the American Legion in Hebron. Although she didn’t care for water, when the family was younger weekends during the summer months were often spent with the family at Lovewell Lake. In 1998, Vi and Ab moved off the farm and bought a home in Shickley. Vi welcomed the conveniences of close friends near by, the Methodist Church and a grocery store in Shickley. She took pride in her home in town and maintained her yard just like when she lived on the farm. Vi enjoyed volunteering her time in the church. She was a former Sunday school teacher and helped with Bible School. She was a member of the Shickley United Methodist Church, and a past member of the Bethel Church, the Carleton Women’s Club, the Carleton Legion Auxiliary, and Order of the Easter Star. Vi loved her family dearly and she enjoyed sharing news about them with everyone she visited with. If you ever stopped by her house, you could look on the refrigerator and see a collage of pictures and news articles detailing their activities. Vi had an all around good sense of humor. She loved to share a joke and have a good laugh. It’s her wit and sense of humor that will be missed most by her family and friends. Vi was preceded in death by her parents; husband Albert Miller; son DeRoy Miller; great granddaughter Tyler Brooke; sisters Velma, Dorothy, and June; brothers Norman and Lowell. She is survived by her daughters Sharon & Tom McDonald of Lincoln, Nebraska and Betty & P.R. Farmer of Geneva, Nebraska; grandchildren Dan & Sarah Miller and their daughters Hannah & Hailey of Carleton, Nebraska, Ryan & Lesley Miller and their daughter Reagan & son Beau of Cortland, Nebraska, Nathan & Liz Farmer and their son Liam of Elkhorn, Nebraska, Shaun & Heidi Farmer and their daughters Ashlyn & Leah of Geneva, Nebraska, Tyler & Megan Miller and their son Mason of Lincoln, Nebraska, and Paige & Drew Weedin and their daughters Delaney and Henley of Aurora, Nebraska; dear cousin Lois Fangmeier of Hebron; and nieces and nephews. A Funeral Service for Vi was held on Wednesday, January 11, 2017 at 11:00 a.m. at the United Methodist Church in Shickley. Pastor Scharleen Cross was the pastor. Marti Alfs played the prelude and postlude music and Karl Brinkman performed “Precious Lord, Take My Hand,” “To Where You Are,” and “The Lord’s Prayer.” Pallbearers for the service included Dan Miller, Ryan Miller, Nate Farmer, Shaun Farmer, Tyler Miller, Paige Weedin and Drew Weedin. It was Vi’s wish to be cremated following the service. Her cremains will be interred in the Carleton Cemetery next to her husband, Albert and son, DeRoy, at a later date. Memorials are directed to the United Methodist Church in Shickley. Farmer & Son Funeral Home conducted the services. Online condolences may be left at www.farmerandsonfuneralhome.com.

Violet Ruth Miller was born to Lloyd and Katie (Ulm) Goodman near Belvidere, Nebraska on January 16, 1924. She passed away on Wednesday, January 4, 2017 at Heritage Crossings Nursing Home in Geneva at the age of 92 years, 11 months, and 19... View Obituary & Service Information

The family of Violet R. "Vi" Miller created this Life Tributes page to make it easy to share your memories.