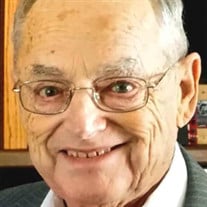 A Funeral Service for Virgil will be held on Wednesday, January 26, 2022 at 10:30 a.m. at the United Methodist Church in Geneva, Nebraska with Pastor Doug Griger presiding. Visitation will be held on Tuesday, January 25, 2022 from 1:00 p.m. until 8:00 p.m. with family present from 5:00 p.m. until 7:00 p.m. at Farmer & Son Funeral Home in Geneva, Nebraska. Military Graveside Services will be conducted following the funeral service in the Geneva Public Cemetery. Memorials are to be directed to the family to be designated at a later date. To view the Livestream Video you can go to Farmer & Son Funeral Home's Facebook Page or in your search engine type @friendlyfuneraldirectors and click the link to Farmer & Son or click this link https://www.facebook.com/friendlyfuneraldirectors/Funeral and it should direct you to our Facebook Page. Virgil L. Cohagan was born to Floyd and Luella (Sears) Cohagan on September 14, 1931 in Chicago, Illinois and passed away on January 19, 2022 in York, Nebraska at the age of 90 years. When Virgil was 3 years old, he moved with his parents and older sister, Yvonne, to Polk, Nebraska, where he lived until the age of 12, then moved to York, Nebraska, where he joined the Nebraska National Guard at the age of 16 and graduated from York High School at the age of 17. Upon reach-ing the age of 18 years old, Virgil resigned from the National Guard and joined our United States Army, where he remained until his honorable discharge in December of 1969 with the rank of Ser-geant First Class. During his time in the service, he met and married Arlene I. Krause of Geneva, Nebraska on in March of 1956. To this union came their daughter, Deborah Jo and son, Larry Dale. In 1968, they adopted twin boys in Germany, giving them names of Kent Herman and Kevin Floyd, naming them after their adopted grandfathers. After retiring from his services in the United States Army, Virgil’s family returned to York, Nebraska where he was hired at Champion Home Builders and Dewied Casing Company and Arlene was hired and worked at Deluxe Cleaners. In 1973, Virgil was hired as the York County Veteran’s Service Of-ficer, a position he dearly loved and was very successful at. In December of 1974, Virgil was of-fered the position of Disabled Veteran Outreach Representative in Kearney, Nebraska, working for the Department of Veteran Affairs. He remained at this job until 1996 when he retired. After retiring, Virgil and Arlene moved to Johnson Lake and Elm Creek, Nebraska before settling back in Kearney, Nebraska where Arlene passed away in February of 2020. After Arlene’s passing, at the recommendation of his family, Virgil returned to York, Nebraska in July of 2020. He was preceded in death by his wife of nearly 64 years, Arlene; his sons, Larry and Kent Cohagan. He was also preceded in death by his parents, Floyd and Luella Cohagan and sister, Yvonne Orlando. Left to mourn his passing are his daughter, Deb (Bob) Orlando of Bradshaw, Nebraska; brother, Mar-lan (Nancy) Cohagan of McCool Junction, Nebraska; sisters, Loree Irmer of Russellville, Arkansas, and Karen (Larry) of Branson, Missouri; 3 grandchildren, Deanna, Stacey and Kurt; 3 great grandchildren, Elli, Conner, and Trenton; 2 great-great grandchildren, Braxton and Keelan.

The family of Virgil L. Cohagan created this Life Tributes page to make it easy to share your memories.

A Funeral Service for Virgil will be held on Wednesday, January...

Send flowers to the Cohagan family.