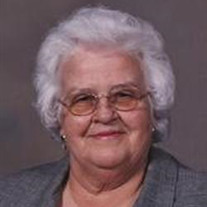 Funeral services for Virginia will be held on Friday, August 8, 2014 at 10:30 a.m. at the First Congregational United Church Of Christ in Geneva. Graveside services will follow the funeral in the Geneva Public Cemetery. Visitation for Virginia will be held on Thursday from 1:00 p.m. to 8:00 p.m. with family greeting friends from 6 - 8 p.m. at the Farmer & Son Funeral Home in Geneva. Memorials are directed to the Geneva Rescue Unit or the Fillmore County Hospital Foundation. Virginia was born to Lloyd and Alberta “Gladys” (Jacobsen) Broman on May 11, 1932, at the family home south of Fairmont, and passed away August 4, 2014 at the Fairview Manor in Fairmont, Nebraska at the age of 82 years, 2 months, and 24 days. She was one of 4 children in the family. She grew up on the family farm and attended country school. She attended Fairmont High School and graduated from there on May 18, 1949. After graduation, she worked at the Country Store and JC Penney. Virginia was married to Lambert Hopken of Geneva, Nebraska on June 28, 1953 and to them 4 children were born. After she was married, she worked at the Fillmore County Extension office, but the majority of her working years were at the Fillmore County Hospital. In addition to her work outside the home she spent many hours taxiing children to events including 4-H club meetings, cheerleading, football, baseball, band practice, piano lessons, and Sunday school. Cooking for the masses was her specialty, a cake for graduation, pies for the neighbors, and sandwiches for the road. She also could be found driving the tractor when needed and doing work around the farm. Virginia was a member of the Geneva Congregational United Church of Christ for nearly 60 years. She also was a member of the VFW Ladies Auxiliary and the Geneva Grange, where she held the office of Secretary. While secretary, she was honored with the top Grange secretaries book. Virginia was preceded in death by her parents, Lloyd and Gladys Broman, sister and brother-in-law Helen and Glen Van Andel, sister-in-laws LaNora Headrick and Virjean Schinzel and an infant brother. She is survived by her husband, Lambert, and son Larry and wife Lisa, of Geneva. Daughters Jan Walter and husband Harold of Martinsville, Indiana; Karen Jeske of Bloomington, Minnesota; Linda Stauffer and husband Kent, of Indianapolis, Indiana. Grandchildren Amanda Walter, Anton, Hannah, and Caleb Jeske, Lauren and Leyton Hopken, and Dillon and Sydney Stauffer. Brother and sister-in-law, Ralph and Lora Broman, brother-in-laws Allen Headrick and Waldo Schinzel. Funeral services were conducted from the Congregational United Church of Christ, Geneva, Nebraska on Friday, August 8th with the Rev. Diane G. Ryder and Kim Dunker officiating. Nancy Cradduck accompanied Delwyn Myers who sang Because He Lives and Peace in the Valley. Pallbearers were Lenny Ackland, Bob Kohler, Tom Novak, Rod Norrie, Jason Tatro, Jeff Whitley, and Ron Fleecs. Honorary pallbearers were Virginia’s grandchildren and her many friends. Interment was in the Geneva Public Cemetery with Farmer and Son Funeral Home in charge of the arrangements. Memorials are directed to the Geneva Rescue Squad or the Fillmore County Hospital Foundation.

Funeral services for Virginia will be held on Friday, August 8, 2014 at 10:30 a.m. at the First Congregational United Church Of Christ in Geneva. Graveside services will follow the funeral in the Geneva Public Cemetery. Visitation... View Obituary & Service Information

The family of Virginia I. Hopken created this Life Tributes page to make it easy to share your memories.

Funeral services for Virginia will be held on Friday, August...

Send flowers to the Hopken family.