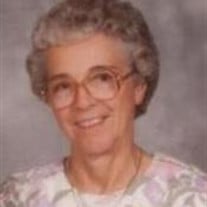 Virginia Mary (Wright) Vavra was born to Norman Warren and Ruth (West) Wright on the family farm three miles west of Ohiowa, Nebraska on March 26, 1927.  She was the fifth of seven children.  She died October 11, 2012 at Autumn House in Lincoln, NE at the age of 85 years, 6 months, and 15 days.     Virginia attended grade school at Goldenrod District #42, and graduated from Ohiowa High School in 1944.  She then attended summer school at Kearney College earning her Normal Training Teaching Certificate.  She then taught at two country schools, Dudley and Harmony.    Virginia met Milton Vavra at a dance in Ohiowa.  They were married September 2, 1947 at the Methodist Church in Ohiowa.  Milt and Gin began their 54 year marriage on a Saline County farm that was originally home to Milton’s parents.    They were parents of two children, Kay Janelle and Daniel James.  Virginia was devoted to her children.  She enjoyed her grandchildren and great- grandchildren to whom she was generous, contributing towards their education.    She tended a large garden, canning and freezing produce each year.  She loved to bake and was known for her rolls and braided egg bread.  She enjoyed sewing and had the goal of making a quilt for each grandchild.  She was always on call to drive a tractor or truck, or run to the implement store for parts.  When Dan returned home to farm, Milton and Virginia built a new home a few miles away and continued to farm.    She and Milton especially enjoyed dancing and attended many polka and modern dances.  They also liked to travel in later years, enjoying several trips with Becwar Tours, as well as many Army reunion trips that took them to several states.    Virginia was an active member of the community. She was a member of the Milligan Juniors Extension Club and The Milligan Legion Auxiliary Post 240.  She also volunteered her time with the American Red Cross Bloodmobile.  Virginia was also an active member of the Milligan United Methodist Church.   She taught Sunday School, and served as Sunday School Superintendent.    She was also a faithful member of the United Methodist Women.    Virginia is preceded in death by her parents, husband Milton in 2001: infant sister Faye, sister and brother-in-law, Ruth and Keith Ozenbaugh of Ohiowa, brother and sister-in-law Norman and Beverly Wright of Geneva, and brother-in-law Leslie Vavra of Exeter.     She is survived by daughter Kay and husband Don Rempe, of Lincoln, NE; son Dan and wife Jo Ann (Christiancy) Vavra of Friend, NE.  Three sisters and their husbands, Elnora and Ed Schulz of Oxnard, CA; Delight and Archie Chapman of Geneva NE, and Gloria and Hal Mullison of Flat Rock, NC.  Sister-in-law Evelyn Vavra of Geneva, NE.  Seven grand-children; Paul (Renee)Rempe of Glenview, IL, Mike (Angie) Rempe of North Richland Hills, TX, Kris (Jason) Rohde of Omaha, NE, Meghan (Bobby) Lee of Kilua,HI, Andrew Rempe of Lincoln, NE, Kelly (Brett) Burenheide of Firth, NE, and Corey (Natasha)Vavra of Lincoln, NE.   Thirteen great-grandchildren; Olivia, Anna, and Emma Rempe; Makenzie, Alec, and Grace Rempe; Gaven and Harrison Rohde; Liliana Lee; Carter, Dawson, and Easton Burenheide; and Brogan Vavra.  Many cousins, nieces, and nephews. Memorial services will be conducted from the Farmer & Son Funeral Home - Kotas Chapel in Milligan, Nebraska on Monday, October 15, 2012 at 10:30 a.m.  A signing of the book will take place on Sunday from 1:00 p.m. until 8:00 p.m. with the family greeting friends from 1:00 p.m. until 3:00 p.m. at the Funeral Home in Milligan.  Inurnment will be in the Bohemian National Cemetery.  A memorial service will be held in Lincoln at a later date.

Virginia Mary (Wright) Vavra was born to Norman Warren and Ruth (West) Wright on the family farm three miles west of Ohiowa, Nebraska on March 26, 1927.  She was the fifth of seven children.  She died October 11, 2012 at Autumn House in Lincoln,... View Obituary & Service Information

The family of Virginia M. Vavra created this Life Tributes page to make it easy to share your memories.