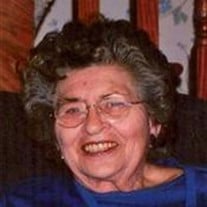 Funeral services will be held 2:00 p.m. Monday, April 25th at the Grace Lutheran Church in Geneva, Nebraska. Public visitation will begin Sunday at 4:00 p.m. until 8:00 p.m. at the Farmer & Son Funeral Home in Geneva, NE. Interment will be in the Geneva Public Cemetery. Virjean “Jean” Faye Schinzel Virjean Faye Schinzel was born to Bernard Herman Hopken and Ella (Wolfteich) Hopken on March 16, 1933 at Ohiowa, Nebraska and passed away on April 20, 2011 at Fillmore County Hospital in Geneva, Nebraska, at the age of 78 years, 1 month and 4 days. She was one of 3 children in the family.  Virjean’s childhood was spent in the areas of Ohiowa and Martland, moving to a farm near Geneva in her teen years. Virjean attended Geneva Public School where she graduated in 1950. Upon graduation, she worked at the Hested Store where she met her future husband, Ralph “Waldo” Schinzel. After their marriage on April 10, 1955, they lived on a farm northwest of Grafton before moving to the homestead west of Geneva where they lived for 48 years before moving into Geneva. Virjean was a housewife who devoted her life to her husband and children and adored her grandchildren.  Virjean was baptized at Zion Lutheran Church in Shickley before joining Grace Lutheran Church in Geneva where she was a faithful member serving on the Ladies Aide and as a Sunday School teacher. Jean loved flowers, gardening, her extended family and visiting with friends. A very significant event in her life was her kidney transplant in 1990.  Virjean was preceded in death by her parents, father-in-law and mother-in-law, Ralph & Gladys Schinzel, sister, LaNora Headrick, brother-in-laws Charles Schinzel and his wife, Jo and Dean Schinzel and his wife Dorothy. Virjean is survived by her husband Waldo, her daughter Gail (Arend) Baack, Grand Island, NE; sons Glen (Judy) Schinzel, Bay City, TX; Gary (Karen) Schinzel, Phoenix, AZ; and Gene Schinzel, Hutchinson, KS. Grandchildren, Karina Baack, Omaha, NE; Tiffany (Jason) Beaty, Sturtevant, WI; Charles (Melissa) Johnson, The Woodlands, TX; Matt (Holly) Johnson, Broken Arrow, OK; Jeff (Sara) Johnson, Del Rio, TX and 8 great-grandchildren. Brother Lambert Hopken and wife Virginia, Geneva, NE

Funeral services will be held 2:00 p.m. Monday, April 25th at the Grace Lutheran Church in Geneva, Nebraska. Public visitation will begin Sunday at 4:00 p.m. until 8:00 p.m. at the Farmer & Son Funeral Home in Geneva, NE. Interment will be... View Obituary & Service Information

The family of Virjean Faye Schinzel created this Life Tributes page to make it easy to share your memories.

Send flowers to the Schinzel family.