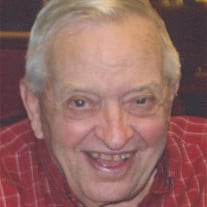 Ralph “Waldo” Schinzel was born on March 29, 1930 on the family farm three miles southwest of Grafton, NE in the same room where his father had been born. He was the 2nd of four children born to Ralph Milton Schinzel and Gladys Vivian (Hubbard) Schinzel. Waldo passed away on October 4, 2016 at Heritage Crossings in Geneva, NE at the age of 86 years, 6 months and 6 days. Waldo began his schooling at a country school and upon graduation from Sutton High School in 1947, he attended the University of Nebraska – Lincoln for one semester before returning home to the family farm. He was drafted into the United States Army in 1950 where he served both domestically as well as an international tour in Italy. He was honorably discharged in 1953. Soon after, he met the love of his life the late Virjean Faye (Hopken) Schinzel. After their marriage on April 10, 1955, they lived on a farm northwest of Grafton before moving to the homestead west of Geneva where they lived for 48 years before moving into Geneva. Waldo was a dedicated farmer who devoted his life to his wife, children, grandchildren and great-grandchildren. He loved being on the farm, and his passions included his extended family, visiting with friends, and gardening. As a child, Waldo learned how to crochet from his mother. This hobby carried on with him throughout his life and it gave him much joy to make and gift many of his creations to family and friends. Waldo will be remembered by many for his big heart and sense of humor. Waldo was preceded in death by his wife Virjean (Hopken) Schinzel; his parents; father-in-law and mother-in-law Bernard & Ella Hopken; sister Phyllis Samuelson and her husbands Phillip Skinner, Robert Krohn, and Ed Samuelson, brothers Charles Schinzel and his wife Jo, and Dean Schinzel and his wife Dorothy. Waldo is survived by his daughter Gail (Arend) Baack of Grand Island, NE; and three sons Glen (Judy) Schinzel of Bay City, TX; Gary (Karen) Schinzel of Phoenix, AZ; and Gene Schinzel of Omaha, NE. He has five grandchildren Karina (Zach) Loder, Omaha, NE; Tiffany (Jason) Beaty, Omaha, NE; Charles Johnson, Magnolia, TX; Matt Johnson, Greenbrier, AR; Jeff (Sara) Johnson, Dyess AFB, TX; and fifteen great-grandchildren. Funeral service for Waldo will be 10:00 a.m. Monday, October 10, 2016, at the Grace Lutheran Church in Geneva, Nebraska with Pastor Stephen Kruschel officiating. Burial will be in the Geneva Public Cemetery Public Visitaton will begin Sunday October 9, 2016 from 2:00 p.m. until 8:00 p.m. with family greeting friends from 4 to 7 at Farmer & Son Funeral Home in Geneva Memorials are directed to the Grace Lutheran Church

Ralph &#8220;Waldo&#8221; Schinzel was born on March 29, 1930 on the family farm three miles southwest of Grafton, NE in the same room where his father had been born. He was the 2nd of four children born to Ralph Milton Schinzel and Gladys... View Obituary & Service Information

The family of Waldo Schinzel created this Life Tributes page to make it easy to share your memories.

Send flowers to the Schinzel family.