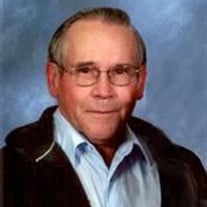 Warren Edward Kennel was born to Edward R. and Neoda Edna Lichti Kennel on August 7, 1937 at Geneva, NE and passed away May 12, 2013 at Lincoln, NE at the age of 75 years. He was one of three children in the family. Warren grew up on the family farm near Strang, NE. He was baptized at Salem Mennonite Church on September 24, 1950. Warren and his pony, Floss, attended School District 93 with some of his Kennel cousins, the Schelkopfs, the Lauber girls and their ornery brother John until Warren’s sister Norma began teaching at Strang. Warren attended Strang School until 1949, when his parents moved to Geneva. He graduated from Geneva High School in 1955. During his school years in Geneva, he worked at Kamler Implement, starting with sweeping the floor in the 8th grade. By the time he graduated from high school, he was a mechanic, working on Allis Chalmers tractors and Pontiac cars, which was a good fit after graduation, when Warren and his pet skunk, Matt Dillon moved in with his brother Wayne and Betty, and their children Lonnie, Victor and Vicki, and began farming with Wayne using Allis Chalmers equipment. During these years, Warren rode along with a friend who was dating a Deshler girl. Warren would get dumped off at this girl’s parents place while they went on their date. He became friends with her younger sister, Janet Marquart, who was too young to date at the time. Finally Janet was old enough, and the two began dating. In late 1960 to 1962, Warren served the US Army in Denver at Fitzsimmons Hospital, serving in the Medical Research & Nutrition Lab. There, he and other Mennonite boys participated in various 8-12 week long nutritional experiments. On Warren’s leaves, he would trek back to Nebraska, trying to go faster every trip, to spend time with his fiancée Janet, who was then a high school senior. On June 10, 1962, Warren and Janet were married at St. Peter’s Lutheran Church in rural Byron. To this union, two children were born, Randy Ray in ‘63 and Joni Dee in ‘66. The young family attended Bethesda Mennonite Church in Henderson until 1966, when Warren & Janet, Wayne & Betty, their parents, and a small congregation laid the cornerstone to Faith Mennonite Church in Geneva. Warren and Janet were faithful members until the church dissolved in April 1994. They joined the Geneva United Methodist Church, and have been dedicated members since. After their marriage, Warren and Janet built a home next to Wayne & Betty and resumed farming with them, and when they dissolved the partnership in 1988, the families had worked together for 33 years, most of which involved milking a small herd of dairy cows two times a day, and all the chores that go with that, year round. Warren and Wayne would sometimes take a liking to a special cow and name them; Ada, Barbara and Rabbit come to mind. During his farming years, Warren and Janet had a photography business, taking wedding and graduation pictures. After farming, the couple bought a home in Geneva, and Warren worked for the next 20 years, including jobs at Alfs Well Drilling, Heritage Crossings, Geneva Electric, various mowing jobs around town, and finally worked for his good friend Darrel Mosier and got to farm the Kennel ground again. Warren and Janet enjoyed traveling together. As a young family, they would pack up the car and take the kids on family vacations, which were always an adventure, and in later years they enjoyed weekend trips to flea markets and gospel concerts. They celebrated their 50th Wedding Anniversary in June 2012. Warren loved people. He liked to tease and had a fun sense of humor. He was ornery that way. He enjoyed fishing and woodworking, and tinkering around in his shop. He was a collector, and enjoyed hunting for marbles and trade tokens at flea markets. Randy and Warren spent lots of time together in the last few years with their garden tractor collection, and Warren enjoyed getting them running again and showing some of them off in parades. Warren’s three grandchildren brought much joy to his life. From playing cards to hunting bears in the basement with flashlights for the millionth time, he was always a good sport. Warren and Janet could always be found in the crowd for soccer, football and basketball games, school plays, band and choir concerts, volleyball matches and track meets if they involved Mitchell, Riley or Emileigh. Warren’s faith was an important part of his life. He actively participated in the Men’s Fellowship and served on the Trustee Board and Worship Committee at church, and kept his Bible by his chair. He lived his life as an example of what it means to be a Christian. He is preceded in death by his parents, Edward and Neoda Kennel, sister Norma Saltzman and father-in-law William Marquart. He is survived by his wife of 50 years, Janet Kennel of Geneva, son Randy and Kristi Kennel of Geneva, daughter Joni and Ron Nuss of Sutton, grandchildren Mitchell Nuss, Riley Nuss and Emileigh Kennel, brother Wayne and Betty Kennel, brother-in-law Levoy Saltzman, Mother-in-law Irma Marquart, Sisters-in-law Merna Yoder, Alice & Jerry Vieselmeyer, Nancy & Ken Vogel, many nieces, nephews and friends. Funeral services for Warren will be held on Friday, May 17, 2013 at 10:30 a.m. at the Geneva United Methodist Church with Pastor Ron Harris officiating the services. Graveside services will follow the funeral service in the Geneva Public Cemetery. Public visitation for Warren will be held on Thursday, May 16, 2013 from 1:00 p.m. to 8:00 p.m. with family present from 5-7 p.m. at the Farmer & Son Funeral Home in Geneva. Memorials are directed to the American Cancer Society or the Geneva United Methodist Church.

Warren Edward Kennel was born to Edward R. and Neoda Edna Lichti Kennel on August 7, 1937 at Geneva, NE and passed away May 12, 2013 at Lincoln, NE at the age of 75 years. He was one of three children in the family. Warren grew up... View Obituary & Service Information

The family of Warren E. Kennel created this Life Tributes page to make it easy to share your memories.