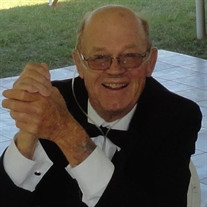 Warren Due Thomsen of Exeter, NE was born at home in York County, on August 31, 1938, to Fredrick and Anna (Due) Thomsen. He was the third oldest son of five boys. Warren was baptized and confirmed in the Danish Lutheran Church in Cordova, and was a member of Trinity Lutheran Church. Warren attended Country School District 97 through 8th grade and Exeter High School where he graduated with the class of 1956. While in high school, Warren was the president of a newly formed chapter of F.F.A. for two years and enjoyed building many projects. Warren enjoyed all sports very much while in high school and was part of the football team that was State Champion in 1956. He enlisted in the U.S. Army in March of 1957 and was stationed in Fort Lewis, Washington with the 12th Infantry 4th Division, for two years of active duty. After returning home, he served four years in the reserves. He received an honorable discharge in March of 1959. Warren was united in marriage to Lois Marie Dumpert on August 24th, 1960 at St. Stephen’s Catholic Church in Exeter, NE. To this union three sons were born, Michael Todd, Douglas William and James Warren. Until his retirement Warren farmed in the Exeter area. Warren was a member of Cordova Legion Post #359, Cordova Volunteer Fire Department, Cordova Coop Board, Cordova Community Club, and Nebraska Street Rod Association. Warren served as Scout Master for 41 years with Cordova Boy Scout Troop #359. 27 young men earned the rank of Eagle Scout while he was Scout Master, but countless young men learned life lessons and skills while they were members of the troop. He could have never done this without all of the help from his numerous assistant Scout Leaders. Left to cherish his memory are his wife of 57 years, Lois of Exeter; sons Michael Thomsen of Exeter; Douglas (Dacel) Thomsen of Beaver Crossing; James Thomsen and Anna Pedersen of Exeter; grandchildren, Jared (Brittany) Thomsen and Ty and Brynlee of North Platte; Mackenzie (Nate) Gauss and Cohen of Iron Mountain, MI and Maitlyn Thomsen of Beaver Crossing. Also surviving are brothers and sisters-in-law Vernon and Grace Thomsen of Omaha and Gale and Cynthia Thomsen of Fairmont; brothers-in-law and sisters-in-law Jean Rich of York; Bob and Jane Dumpert of Exeter; Tom and Phyllis Dumpert of Lincoln; Carol and Gary Aden of Real Way Surprise, AZ; Gary and Sherry Dumpert of Exeter. Warren was preceded in death by his parents (Fred and Anna); brothers Roland Thomsen and Richard (Red) Thomsen and sister in law Shirley Thomsen and parents-in-law, William and Dorothy Dumpert. A Memorial Service for Warren was held on Thursday, September 14, 2017 at 2:00 p.m. at Trinity Lutheran Church in Cordova. Pastor Michelle Kanzaki officiated the service. Amy Emshoff accompanied the congregation in the singing of “How Great Thou Art” and “Borning Cry”. Amy also accompanied Jayne Petersen in the singing of “Amazing Grace.” Honorary pallbearers for the service included Jared Thomsen, Mackenzie Gauss, Maitlyn Thomsen, Ty Kindig, Brynlee Thomsen, Cohen Gauss, Brittany Thomsen, Nathan Gauss, and Troop 359 Scout Assistants and other committee members. Inurnment was held in the Zastrow Cemetery with Military Rites performed by the Cordova American Legion Post 359. Memorials are suggested to the Cordova Fire Department or the Trinity Lutheran Church in Cordova. Farmer & Son Funeral Home conducted the services. Online condolences may be left at www.farmerandsonfuneralhome.com.

Warren Due Thomsen of Exeter, NE was born at home in York County, on August 31, 1938, to Fredrick and Anna (Due) Thomsen. He was the third oldest son of five boys. Warren was baptized and confirmed in the Danish Lutheran Church in Cordova,... View Obituary & Service Information

The family of Warren D. Thomsen created this Life Tributes page to make it easy to share your memories.

Warren Due Thomsen of Exeter, NE was born at home in York County,...