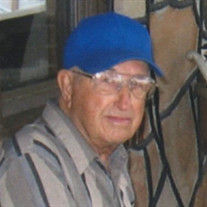 Wayne Franklin Bowman, 87, of Bruning passed away Friday January 16, 2015 in Geneva. He was born February 2, 1927 in rural Bruning to Frank and Edna (Warnke) Bowman. He was the older of two children. He was baptized, confirmed and married at Trinity Lutheran Church in Bruning, Nebraska. He remained a lifetime member. Wayne attended school in Bruning. He enlisted in the Navy while still in High School and was called to boot camp before he graduated. An empty chair was left for him at the graduation ceremony. Wayne served one year in the Navy. Upon returning he worked for Carl Bowman Electric and Bringewatt Feed. He worked for 40 years at Hinrichs and Son. Wayne also worked part time for 18 years for the Village of Bruning. Wayne was a member of the legion and served as a volunteer fire fighter for many years. Wayne married RaVae VanWesten May 1, 1949 and from this union 3 children were born: Connie, Terry and Craig. They were married for 65 years. After retirement he loved fishing, fishing and more fishing. He enjoyed having a large garden and watching it grow. Wayne liked all sports especially watching his grandchildren play. Wayne adored spending time with his family often making his famous homemade ice cream. He will be greatly missed by everyone who ever had the privilege of knowing him. He is preceded in death by his parents Frank and Edna. Wayne is survived by his wife, RaVae Bowman, Geneva; Brother, Don Bowman, Mesa AZ; sister-in-law Ardene Mammen of Geneva; Daughter, Connie (Gale) Albers, Omaha; Sons Terry Bowman, Bruning; Craig (Tammie) Bowman, Geneva; Grandchildren, Christina Albers, Omaha; Nathan (Jamie) Albers, Waterloo; Brittany (Trevor) Wit, Chester; Broderick Bowman, Bruning; Whitney (Dana) Lauber, Geneva; Josh Bowman, Gretna; Madison Bowman, Geneva; Great grandchildren, Corryn Albers, Oliver Lauber and Trindon Wit; nieces and nephews and friends. Funeral services for Wayne will be 10:30 a.m. Monday, January 19, 2015, at the Trinity Lutheran Church in Bruning, Nebraska with Pastor Stuart Sell officiating. Interment will be in the Trinity Lutheran Cemetery. Public visitation will begin on Sunday 1 pm until 8 pm with family greeting friends from 5 to 7 at the Farmer & Son Funeral Home in Geneva. Memorials are directed to the Trinity Lutheran Church Youth

Wayne Franklin Bowman, 87, of Bruning passed away Friday January 16, 2015 in Geneva. He was born February 2, 1927 in rural Bruning to Frank and Edna (Warnke) Bowman. He was the older of two children. He was baptized, confirmed and married at... View Obituary & Service Information

The family of Wayne F. Bowman created this Life Tributes page to make it easy to share your memories.