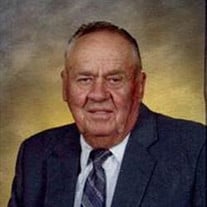 Wayne Keith Matejka was the only child born to Frank and Clara Rippe Matejka on January 7, 1928, at their rural home at Strang, Nebraska. He passed away peacefully at the York General Hospital on February 17 at the age of 86 years, 1 month, and 10 days, surrounded by his wife, five daughters, and five son-in-laws. He was born and raised on the family farm near Strang where he attended Strang School through the eleventh grade. He attended Ohiowa High School his senior year because he wanted to play basketball and graduated in 1946. He was baptized June 14, 1928, and confirmed March 14, 1948, at St. John's Evangelical Lutheran Church (South) (now called Grace Lutheran) of Ohiowa. He transferred his membership in 1951 to St. John's Lutheran Church in Ohiowa. Wayne married Opal Rose Schrock of Geneva on January 22, 1950, at her brother's home at Davenport, Nebraska. They recently celebrated their 64th wedding anniversary. This marriage was blessed with five daughters--Sherri, Kathy, Deb, Julie, and Kari Jo. He had many interests. His favorites were softball/baseball and 4-H. He touched the hearts of many people through softball. Wayne had a very successful record of 645 wins and 185 losses with the Strang Ladies Softball team of 40 years. He received the Jim Hall Memorial Award in recognition of his outstanding coaching ability in 1993 and was inducted in the Nebraska Softball Hall of Fame in 1995. Many awards were received for winning league, invitational, district, and state tournaments. The highlight was winning the State Tournament in 1996. Wayne was involved in 4-H for over 50 years. Being active for many years through the 4-H program as a parent, club leader, and supporter, he attended many county fairs and other shows at the local, state, and national levels. His advice to his girls and grandchildren helped them win many honors and awards. During his early days of farming, he enjoyed trucking and custom corn shelling. Although his main love was farming, he also enjoyed selling Stormor Bins & Buildings for 45 years. Many trips were made with his red pickup to Omaha, Grand Island, and Fremont He was active in many community activities--Strang School Board Member for 50 years, Strang CIP, Geneva Rural Fire Board, Belle Prairie Precinct Board, and Exeter Feeders & Breeders Association. Family activities were important to him whether it was a sports activity, 4-H event, or holiday gathering. During the last few years, Wayne enjoyed spending time at Bubba's Anytime for a cup of coffee, meal at noon, afternoon snack, or evening meal with family and friends. He was preceded in death by his parents. Those left to cherish his memory are his wife Opal; five daughters, Sherri (Jim) Reinsch of Geneva; Kathy (Bruce) Soukup of Strang; Deb (Leroy) Rohr of Tobias; Julie (Chris) Dunker of Strang; Kari Jo (Bryan) Alfs of Shickley. Grandchildren are Marc (Marci) Reinsch of Geneva; Jami (Mark) Schmidt of Strang; Brent Reinsch of Geneva; Derek Reinsch of St. Paul; Kali Reinsch of Sutton. Anthony, Ashton, and Ashli Soukup of Strang. Michael (Katy) Rohr of San Antonio, Texas; Brandon Rohr of Jacksonville, Florida; Dustin Rohr of Tobias. John, Regan, and Adam Alfs of Shickley. Great-grandchildren are Marek and Mara Reinsch of Geneva, Cullan Schmidt of Strang, and Austin Rohr of San Antonio, Texas. Step-great-grandchild is Marissa Howard of Geneva. Wayne and Opal have always enjoyed their family. He was the one who has always been there, loved, cared, and provided for us. Someone we LOVE with all our heart. Funeral services for Wayne were held on Monday, February 24, 2014 at 10:00 a.m. at the St. John’s Lutheran Church in Ohiowa. Pastor Becky Sells and Kim Dunker officiated the service. Marti Alfs played the prelude music before the service and she also played “Take Me Out To The Ballgame” at the conclusion of the service. Karl Brinkman accompanied himself on guitar to “Because He Lives,” “How Great Thou Art,” and “Because Grandpa Told Me So.” Pallbearers for the service included Marc Reinsch, Brent Reinsch, Derek Reinsch, Anthony Soukup, Ashton Soukup, Brandon Rohr, Dustin Rohr, Michael Rohr, John Alfs and Adam Alfs. Honorary bearers were Jami Schmidt, Kali Reinsch, Ashli Soukup, and Regan Alfs. Interment was held in the Ohiowa Public Cemetery following the funeral service. Memorials are directed to the family to be designated at a later date. Farmer & Son Funeral was in charge of the arrangements.

Wayne Keith Matejka was the only child born to Frank and Clara Rippe Matejka on January 7, 1928, at their rural home at Strang, Nebraska. He passed away peacefully at the York General Hospital on February 17 at the age of 86 years, 1 month,... View Obituary & Service Information

The family of Wayne K. Matejka created this Life Tributes page to make it easy to share your memories.

Wayne Keith Matejka was the only child born to Frank and Clara...

Send flowers to the Matejka family.