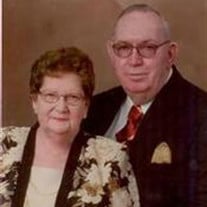 Wayne Franklin Ward was born on the family farm near Earlton, Kansas to Lee Franklin Ward and Opal Almira Hizey Ward on September 12, 1927, the third child of a family of six children. He died peacefully at his home on February 26, 2012. Wayne received his education in Shaw, Kansas. In 1945, he joined the Army and served his country until he was honorably discharged in 1947. He returned to Kansas to start a career that spanned over 47 years with agriculture, managing grain elevators in Neosho County, Kansas and Nebraska. On March 28, 1954, Wayne married Nellie Juanita Evans at her parents home in Rollin, Kansas. To this union, a son, Jerry Wayne was born in 1955. In 1957, they were blessed with another son, Danny Gene. In 1970, Wayne accepted an offer to come to Geneva, Nebraska, and manage the A. Kohler Grain Co., later the B.H.&L Grain Co., and Pillsbury. He worked for Strang Fertilizer until he retired. After retirement, he worked every fall during harvest which he thoroughly enjoyed. Throughout his life, Wayne loved sports. He coached, encouraged, and watched his sons play sports. He spent many noon hours home from work playing ball with his boys. Later, he watched his grandchildren and great-grandchildren in many of their sporting activities. He loved his Nebraska Cornhuskers and numerous football and basketball games on T.V. Wayne and Nita loved to travel. They went to Hawaii and many places in the U.S. They especially enjoyed trips to Las Vegas and family reunions in Kansas. Wayne’s greatest joys in life were his family. His grandchildren, Mark and Laura, spent much of their time with Grandpa and Grandma. Later, he spent time with Alanna and Cameron at all their activities. In the last few years, Wayne was blessed to be Great Grandpa and Papa to nine wonderful Great-grandchildren. They were so special to him. He was never too busy to tease and love them. Wayne never knew a stranger. He was a kind and generous man, showing it in his words and his life. Preceding him in death were his mother and father, Opal and Lee Ward; his brothers, Fred Bolinger and Earnest Ward; brother-in-law, John Drummond; sister-in-law, Maxine Bolinger; and his beloved granddaughter, Laura Osborne. To mourn his passing, his wife of 57 years, Nellie Juanita; his sons and their spouses, Jerry and Pam of Paxton, and Dan and Peg of Geneva; Grandchildren: Mark and wife Kelly of Tryon; Bill Osborne of Paxton; Alanna and husband Ron Kramer of Seward; Cameron of Geneva; Nine Great-grandchildren: Tyson, Karlie, Tagert, Kandace, Mason, Klaire, Madison, Carson and Jaxon; Sisters: Nelva Drummond of Chanute, Kansas; Beulah and husband Oren of Thayer, Kansas; and Ruby and husband Jim Rogers of Cherryvale, Kansas; as well as many nieces and nephews that loved their Uncle Wayne and a host of extended family and friends. Services for Wayne will be held Wednesday February 29, 2012,  at 10:30 a.m. at the Farmer & Son Funeral Home in Geneva, Nebraska. Visitation will begin Tuesday at 1:00 p.m. until 8:00 p.m. with family greeting friends from 5:00 p.m. until 7:00 p.m. A Military Graveside will be at the Geneva Public Cemetery. Memorials are directed to the Tabitha Hospice or the American Cancer Society

Wayne Franklin Ward was born on the family farm near Earlton, Kansas to Lee Franklin Ward and Opal Almira Hizey Ward on September 12, 1927, the third child of a family of six children. He died peacefully at his home on February 26, 2012.... View Obituary & Service Information

The family of Wayne Franklin Ward created this Life Tributes page to make it easy to share your memories.

Wayne Franklin Ward was born on the family farm near Earlton,...