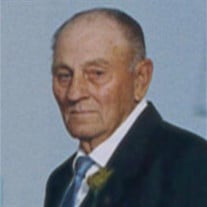 Funeral services for Weldon will be held on Saturday, May 7, 2016 at 10:30 a.m. at St. John's Lutheran Church in Ohiowa, Nebraska with Pastor James Sells officiating. Visitation will take place at Farmer & Son Funeral Home in Geneva, Nebraska on Friday, May 6, 2016 from 1:00 p.m. until 8:00 p.m. with family greeting family and friends from 6:00 p.m. until 8:00 p.m. Memorials are to be directed to the family for a later designation. Military graveside services will be held in the Ohiowa Public Cemetery following the funeral ceremony. Weldon Joseph Bornschlegl was born on August 08, 1923 to Joe and Sophia (Matthies) Bornschlegl on a farm southeast of Ohiowa, Nebraska. He passed away on May 3, 2016 at Fairview Manor in Fairmont, Nebraska at the age of 92 years, 8 months, and 26 days old. He was the younger of two children in the family. He attended eight years of school at District #9, where he was the only one in the class. He then attended Ohiowa Public School where he graduated with the Class of 1940. After graduation he started working for his uncle, Seth Heston, and neighbors as a farm hand from 1940-1942. In 1943 Weldon worked at the Bruning Air Base as a water truck driver and cement truck mixer. In September 1944 he joined the United Stated Army and served during World War II in France and Germany with the 63rd Infantry Division. While there he received the Bronze Star, Combat Infantryman’s Badge, and numerous other medals of honor. In July 1946 he received an Honorable Discharge and returned home to take up farming with his father on the family farm. On September 15, 1946 Weldon was united in marriage to Hazel Denzin. In 1947, they moved to the home place, and to them three children were born, Gaylene, Dennis, and Karlene. They lived on the farm until 1980 when they retired and moved to town. Weldon was baptized by Rev. Bohensen and confirmed by Rev. Churchill. He was a member of St. Johns Lutheran Church in Ohiowa, Nebraska and he was a lifetime member of the American Legion Post #193. He was invited on a trip to Washington D.C for World War II Veterans and recently was given a Quilt of Valor. Weldon was a regular at the Ohiowa CO-OP coffee house, where he enjoyed good conversation. He enjoyed going to the sale barns and could tell you the weight of the livestock before they went on the scales. He enjoyed softball and played it in high school where he acquired the nickname “Shorty” from his coach, which has stuck with him to this day. He then played with the Ohiowa town team until there were not enough players to play any longer. You could find him attending his children’s school activities regardless of the weather. He also attended as many events and activities for his grandchildren and great-grandchildren throughout the years. Weldon was preceded in death by his parents Joe & Sophia (Matthies) Bornschlegl; sister, LaVerne (Bornschlegl) Schelbitzki; brother-in-law, Joe Schelbitzki; and son-in-law, Cecil Gaston. He is survived by his wife Hazel of 69 years; daughter, Gaylene Gaston of Tobias, NE; son, Dennis Bornschlegl and his wife Carol of Lincoln, NE; daughter, Karlene Sharp of Lincoln, NE; grandchildren, Chad Gaston and his wife Kimberly of Geneva, NE; Jacob Bornschlegl of Manhattan, KS; Jennie Guill and fiancé Brian Vana of Lincoln, NE; Justin Guill and his wife Megan of Lincoln, NE; Jera Guill of Lincoln, NE; great-grandchildren; Jayda, Kelsi, and Roman Gaston of Geneva, NE; Madison and Maya Guill of Lincoln, NE; Finley Guill of Lincoln, NE; and numerous nieces, nephews, cousins, and friends.

The family of Weldon Joseph Bornschlegl created this Life Tributes page to make it easy to share your memories.

Funeral services for Weldon will be held on Saturday, May 7,...