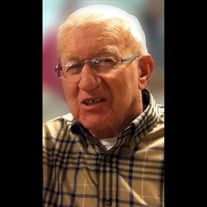 Wendel Darrel Mosier, 82, of Geneva, NE, passed away August 1, 2018, at Heritage Crossings Nursing Home in Geneva, Nebraska. He was born on September 14, 1935, on a farm south of Davenport, Nebraska to Charley and Mildred (Kubicek) Mosier. Wendel lived a very active and inspiring life. He grew up as a child in the Davenport, Nebraska community and was baptized and confirmed at Christ Lutheran Church in Davenport. From a young age, he was also actively involved in agriculture. He was drafted into the US Army (1958-1960) and stationed at Ft Lewis, Washington. Wendel returned home from the Army and shortly thereafter met the love of his life, Carolyn Lauber, who he was married to for 57 years. He was a true hero to his family. Wendel worked for Alf’s Grain Co. in Shickley, Nebraska for 9 years and spent over 33 years of his career as a part of the Superior-Deshler Company in Davenport where his talents were utilized and appreciated. He could fix almost anything and no job was too big for Wendel to tackle. He was active in the community serving on the church council at Christ Lutheran Church, the Davenport School Board, and the Volunteer Fire Departments in Davenport and Shickley. He enjoyed many years of bowling and playing men’s softball. Wendel attempted to retire, but soon realized he loved to be outside and active, so he continued to work with his son Darrel on the farm for an additional 8 years. He loved the farm and would have continued to work if his health had not required him to stop. After retirement, he capitalized on every opportunity to participate in outdoor activities that he enjoyed throughout his life such as gardening and fishing. Wendel loved his family and created an amazing legacy of kids, grandkids, and great-grandkids. He was proud of each of their accomplishments and supported them by attending school award ceremonies, athletic, music, drama events and graduations! He will be remembered for his sense of humor, his wit, and his kind and caring demeanor to all his family and friends. He was preceded in death by his parents; sister, Iola Mosier, and step mother, Ethel Mosier; father and mother-in-law, Henry and Fern Lauber; brothers-in-law, Phillip Lauber, Ron Moore, Dennis Ulrich and Duane Mealey; sisters-in-law, Nelda Moore and LaRayne Siegmann. He is survived by his wife, Carolyn of Geneva; sons, Darrel (Caroline) of Shickley, Nebraska, Reynold (Susie) of Manhattan, Kansas, Clark (Nancy) of Aurora, Nebraska and Matthew (Kathy) of Strang, Nebraska.; brother, Verlin (Sue) Mosier of Davenport, Nebraska; Sisters Shelby (Gaylord) Ehlers of Deshler, Nebraska; Millie Mealey of San Diego, California, and Marilyn Bargen of Hebron, Nebraska; sisters and brothers-in-law; John (Mary) Lauber, Brownsville, Nebraska; Stan (Connie) Morgan, Wichita, Kansas; Shirley Ulrich, Heston, Kansas; Jim Siegmann, Goshen, Indiana; Glen (Lois) Zook, Dublin, Ohio; 11 grandchildren; Kegan Mosier, Paige Willis, JoLynn Mosier, Blake Mosier, Crayton Mosier, Tristen Mosier, Ross Mosier, Caitlin Mosier, Ryan Mosier, Zachary Mosier and Joshua Mosier; and two great-grandchildren, Reese and Judah Mosier; and many nieces, nephews and friends. A Graveside Service for Wendel was held on Saturday, August 4, 2018 at 12:00 p.m. at Davenport City Cemetery followed by a Memorial Service at 2:00 p.m. at Salem Mennonite Church, rural Shickley, Nebraska. Pastor Shawn Nolt officiated the services. Roxie Schlegel accompanied the congregation in the singing of “Precious Lord, Take My Hand,” “When Peace Like A River,” and “God Be With You Til We Meet Again.” Honorary Pallbearers for the service included Kegan Mosier, Paige Willis, JoLynn Mosier, Blake Mosier, Crayton Mosier, Tristen Mosier, Ross Mosier, Caitlin Mosier, Zachary Mosier, Ryan Mosier, and Joshua Mosier. Farmer & Son Funeral Home was in care of the arrangements and online condolences can be left at www.farmerandsonfuneralhome.com. Memorials are suggested to the Christ Lutheran Church or Salem Mennonite Church.

Wendel Darrel Mosier, 82, of Geneva, NE, passed away August 1, 2018, at Heritage Crossings Nursing Home in Geneva, Nebraska. He was born on September 14, 1935, on a farm south of Davenport, Nebraska to Charley and Mildred (Kubicek) Mosier. Wendel... View Obituary & Service Information

The family of Wendel D. Mosier created this Life Tributes page to make it easy to share your memories.

Send flowers to the Mosier family.