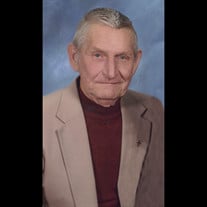 Willard W. Bartels was born to Otto John Bartels and Lena Marie (Schwisow) Bartels on March 4, 1936 on the family farm near Tobias, Nebraska. He passed away on November 1, 2017 at the Fillmore County Hospital in Geneva, Nebraska at the age of 81 years, 7 months, 28 days. Willard received the sacrament of Holy Baptism on March 22, 1936 at Zion Lutheran Church, Tobias, Nebraska. He attended Zion Lutheran School through the 8th grade and was confirmed in his faith at Zion Lutheran Church on April 2, 1950. He graduated from Tobias High School in May of 1954. On June 14, 1959, he was united in marriage to Judith Rose Bender at St. Paul’s Lutheran Church in Scotland, South Dakota. Three children were born to this union. Willard was inducted in the U.S. Army on June 25, 1959 and completed his active duty service on May 19, 1961. He was an avid Husker sports fan. While he was still able to drive, he enjoyed cruising the countryside scouting wildlife and taking pictures. His hobbies included metal-working and reading about the history of World War II. He spent many hours building his own experimental airplane and collected International toy tractors. He was happiest when visiting with his grandchildren. Willard was a volunteer on the Tobias Fire Department for many years, and he was also trained and served the department as an EMT. He served his church in many capacities, some of which included: Elder, Trustee, Chairman of the Congregation, and he was also on the Zion School board of Education. Willard was preceded in death by his parents; three brothers Vernon, Everett and Gaylord; and two sisters-in-law Letha and Iona. He is survived by his wife Judy of Tobias, Nebraska; daughter Victoria Bartels of Lincoln, Nebraska; sons Vaughn and wife Denise Bartels and Vance and wife Jessica Bartels all of Tobias, Nebraska; sisters Leona Klawitter of Milligan, Nebraska, Dorothy Brandt of Western, Nebraska, Donna Steinbrook of Tobias, Nebraska; sister-in-law Pat Bartels of Tobias, Nebraska; seven grandchildren Neal Bartels and Logan and wife Anna Bartels all of Lincoln, Nebraska, Evan and wife Cryssa Bartels of Omaha, Nebraska, Desiree Bartels of Lincoln, Nebraska, Nathan Bartels of Geneva, Nebraska, Erin Criner and husband Andrew of Hastings, Nebraska and Grant Bartels of Tobias, Nebraska. He is also survived by many nieces, nephews and a host of friends. A Funeral Service for Willard was held on Saturday, November 4, 2017 at 10:30 a.m. at the Zion Lutheran Church, rural Tobias, Nebraska. Pastor Paul Beyer officiated the service. Janile Campbell accompanied the congregation in the singing of “How Great Thou Art,” “Be Still My Soul,” “Rock Of Ages,” and “Abide With Me.” Pallbearers for the service included Nathan Bartels, Andrew Criner, Logan Bartels, Even Bartels, Neal Bartels, and Lyle Bartels. Honorary pallbearers were Erin Criner, Desiree Bartels, and Grant Bartels. Interment was held in the Zion Lutheran Cemetery with Military Honors performed by the Tobias American Legion Post 311. Farmer & Son Funeral Home of Geneva conducted the services. Online condolences may be left at www.farmerandsonfuneralhome.com. Memorials are suggested to the family for future designation.

Willard W. Bartels was born to Otto John Bartels and Lena Marie (Schwisow) Bartels on March 4, 1936 on the family farm near Tobias, Nebraska. He passed away on November 1, 2017 at the Fillmore County Hospital in Geneva, Nebraska at the age... View Obituary & Service Information

The family of Willard W. Bartels created this Life Tributes page to make it easy to share your memories.