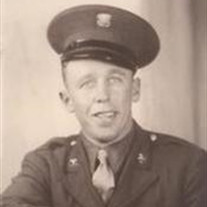 Willard Roy Rippe was born to Herman Ernest Rippe and Wanda Johannah Weber Rippe on August 1, 1920, on the family homestead farm southwest of Ohiowa, NE. He passed away November 7, 2012, at Blue Valley Nursing Home in Hebron, NE at the age of 92 years, 3 months and 6 days. He was one of two children in the family. Willard was baptized October 10, 1920, at St. John’s Evangelical Lutheran Church (Grace). On September 3, 1933, he was confirmed by Pastor William Harder at the same location. His confirmation verse was 1 Timothy 6 Verse 12: “Run your best in the race of faith, and win eternal life for yourself; for it was to this life that God called you when you firmly professed your faith before many witnesses”. He spent his time farming in the Ohiowa and Strang communities. He attended Harmony School through the eighth grade, when he quit school to help his Dad on the family farm. Willard entered the Army on July 26, 1942, as a medic. He was honorably discharged at Temple, Texas, on October 29, 1945. While in the Army, he received his Asiatic-Pacific Theater Medal, Meritorious Unit Award, American Theater Medal, 4 Overseas Service Bars and a Good Conduct Medal. He received his Fillmore Central Honorary Diploma in November, 2001. Willard was married to Patricia Ann Dunker of Strang, NE, on September 26, 1948 at Patricia’s parents’ home. To this union two children were born, Susan and Cheryl. Willard was involved in the Odd Fellows. He was a lifetime member of the Grace Lutheran Church and he served on the Council for a number of years. He was a member of the Ohiowa American Legion Post 193 and a past member of the VFW. Willard was preceded in death by his father and mother, Herman and Wanda and his sister Hazel Bernice Korensky. He is survived by his wife of 64 years, Pat, of Hebron; his daughters Susan (Vaughn) Nun of Derby, KS, and Cheryl (Tom) Houser of Bruning, NE; grandchildren Staci (Tracy) Armstrong of Madison, AL, Alicia (Corey) Reeves of Derby, KS, Ryan (Kristine) Houser of Bruning, NE, Tamara (Trevor) Moyo of Antioch, TN, Eric (Crissey) Nun of Weatherly, PA and Nicole (Spencer) Schoenrock of Gladstone, NE, and by great-grandchildren William and Zachary Armstrong, Brianna and Cooper Reeves, Katelynn and Alexa Houser, Andela Moyo, Summer Peck, and Vaughn and Emmitt Nun. Funeral services for Willard will be Saturday, November 10, 2012 at 10:30 a.m. at the Grace Lutheran Church rural, Ohiowa, Nebraska. Military Graveside service will be at the Ohiowa Public Cemetery. Public visitation will begin Friday, November 9, from 1:00 p.m. until 8:00 p.m. at the Farmer & Son Funeral Home in Geneva, Nebraska. Memorials are directed to the family for later designation in lieu of flowers.

The family of Willard Rippe created this Life Tributes page to make it easy to share your memories.

Send flowers to the Rippe family.