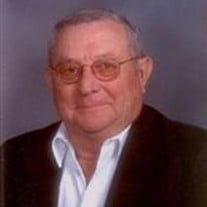 William Gene Krupicka was born to Adolf and Emma (Krisl) Krupicka on December 30, 1934 near Milligan, Nebraska, and passed away Monday, November 19, 2012 at Bryan LGH West in Lincoln, Nebraska at the age of 77 years, 10 months and 19 days. He was one of eight children in the family. William was baptized on June 22, 1935 at the St. Wenceslaus Catholic Church in Milligan,Nebraska. ?William graduated from Milligan High School and then attended Nebraska School Of Barbering at Omaha, Nebraska and graduated in August 1955. He was employed as a barber in Lincoln, York, Grafton and Milligan. He served in the U.S. Army from May 2, 1957 and given an honorable discharge on April 30, 1963. He served 19 months in Germany and France. William was married to Joyce Fields on May 6, 1963 and to them three children were born. William was then employed with Kansas-Nebraska Natural Gas Company, which later known as Kinder-Morgan for 31 years as a service technician. He married Liela Virchow on November 17, 1972 at Davenport, Nebraska William joined the St. Peter’s Lutheran Church in Davenport on May 6th, 1979 by adult confirmation. “Bill” as he was commonly known, was a frequent blood donor to the American Red Cross. He was member of the Lion Club, Amvets, NRA and Pheasants Forever. He was an avid sportsman. William was preceded in death by his parents, Adolf and Emma Krupicka, daughter Darla Jo in infancy, brothers, Lawrence, Raymond and Adolf Jr., Sisters, Antoinette and Grace. He is survived by his wife Liela Krupicka of Davenport, NE, daughters, Dell Hobler of LaVista, NE and Dawn and husband Todd Cundiff of Council Bluffs, IA, Step-sons, Dallas and wife Mary Virchow of Lincoln, NE and Delbert and wife Deb of Seward, NE, a brother, Richard and wife Donna Krupicka of Milligan, NE and a sister, Rita Krupicka of Hemet, CA, by grandchildren Cassidy Hobler, Emma Cundiff and Maxwell Cundiff, Step-grandchildren, Aaron and wife Sarah Virchow, Blake and wife Leslie Virchow, Orion Virchow and Shawn Virchow, also by step-great grandchildren William, Ethan and Allie Virchow and Ryan Daniels also by many nieces and nephews. Prayer services were held Friday, at 10 a.m., November 23, 2012, at the Farmer & Son Funeral Home-Kotas Chapel in Milligan, NE with Pastor Merlin Holtzen officiating. Casket bearers were Alan Krupicka, Rod Krupicka, Brad Kresak, Matt Caldwell, Joel Reinke and Marvin Holtzen. Military graveside services followed the prayer services at the Bohemain National Cemetery conducted by the Milligan American Legion HSSK Post #240 with Farmer & Son Funeral Home-Kotas Chapel in charge of arrangements. A memorial service was held Friday, at 1 p.m., November 23, 2012 at the St. Peters Lutheran Church in Davenport, Ne with Pastor Timothy Prince officiating. Karen Haake accompanied the St Peter’s Lutheran Quartet who sang “Softly & Tenderly,” “How Great Thou Art” and “Abide With Me.” Karen also accompanied the congregation who sang “What A Friend We Have In Jesus.” Memorials are directed to the family.

William Gene Krupicka was born to Adolf and Emma (Krisl) Krupicka on December 30, 1934 near Milligan, Nebraska, and passed away Monday, November 19, 2012 at Bryan LGH West in Lincoln, Nebraska at the age of 77 years, 10 months and 19 days.... View Obituary & Service Information

The family of William G. "Bill" Krupicka created this Life Tributes page to make it easy to share your memories.