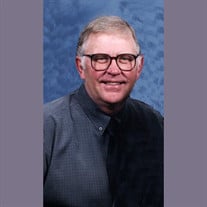 Funeral services for Bill will be held on Thursday, April 9, 2015 at 10:30 a.m at the Trinity Lutheran Church in Bruning. Military graveside services will follow the funeral in the Bruning Public Cemetery. Visitation will be held on Wednesday from 1:00 p.m. to 8:00 p.m. with family present from 5 - 7:00 p.m. at the Farmer & Son Funeral Home in Geneva. Memorials are directed to the family for later designation. William Albert Bowman was born to Emery T. and Josephine E. (Ohlrich) Bowman on August 27, 1942, at Bruning, and passed away April 5, 2015, at St. Mary’s Hospital in Nebraska City, at the age of 72 years, seven months and nine days. He was one of two children in the family. Bill, as he was commonly known by family and friends, attended country school outside of Bruning through the second grade and finished out the remainder of his schooling at Bruning Public School. Following his high school graduation in 1959, Bill worked various construction jobs before being drafted into the US Army in April of 1964. While serving in the Army from 1964-66, Bill worked as a typist recording secret military information for the department of defense. After his honorable discharge from the Army in April of 1966, Bill returned to Bruning and began working for Arnold Norder and Norder Agri-Supply. For the next 40 years, Bill worked for the Norders, first as a farmhand and then eventually as the chemical bulk plant manager up until his retirement in 2006. During this time he also farmed for himself southeast of Bruning until the family sold their farm in 2000. Bill was married to Anne Hinshaw of McCook, on December 18, 1976, and to that union they were blessed with two daughters, Laurie Anne on September 6, 1978, and Jenna Marie on January 25, 1985. Just as his high school senior yearbook recounts, “nothing bothers him one way or another,” that is exactly how Bill lived his life. He always took difficult life circumstances in stride, and that easy-going nature followed him throughout his lifetime. Bill enjoyed socializing and, following his retirement, he especially looked forward to his weekly trip out to Shell to have coffee and snacks with buddies. He was also an avid card player and was frequently seen playing Pinochle at Betty’s Place with locals. Just as much as he enjoyed socializing with friends, he also cherished his alone time, and would often spend countless hours on their front porch or back deck enjoying nature and taking in the peace and beauty of rural Nebraska life. Yes, Bill was a man who enjoyed simple pleasures. A large bowl of ice cream in the evening before bed made any difficulties of the day melt away with every bite. “Nothing bothered him one way or another” as long as there was ice cream in the freezer, peanuts and corn candy in the cupboard, or a bag of black licorice at hand. Of course catching a Kansas City Royals baseball game was his favorite past time come April through October. The highlight for him in 2014 was the Royals winning the AL pennant and playing in the World Series. Although “nothing bothered him one way or another” when it came to most things in life, family did. Bill loved his family, and was a constant presence at his daughters’ activities as they were growing up. He was also very proud of Anne’s highly successful speech and drama program, and throughout the years, he supported the long hours Anne was away from home coaching her teams. At the end of this school year following Anne’s retirement from Bruning-Davenport USD, he and Anne were looking forward to moving to Wahoo to be closer to their daughter Laurie, her husband Jared, and their four children. “Papa Billy”, as he was known by his grandchildren, had limited vision but enjoyed attending his grandkids’ activities. They all looked forward to his visits and eventual residence in Wahoo. Bill was also anticipating Jenna’s upcoming wedding to Chris Howell in June of this year. Even though he will not be there in person, we know his spirit will be present on that day. Bill was an active member of the Bruning American Legion Post #166 where he served at Post Commander and Post Adjutant. He was a member for 49 years. He was also a lifetime member of Trinity Lutheran Church in Bruning. Bill was preceded in death by his parents Emery and Josephine of Bruning, mother-in-law Ardis Hinshaw of Bruning, and brother-in-law Robert E. Hinshaw of McCook. He is survived by his wife Anne of Bruning, daughter Laurie (Jared) Pehrson of Wahoo, daughter Jenna Bowman and fiancé Chris Howell of Nebraska City, grandchildren Ethan, Aubrie, Alexis and Nolan Pehrson of Wahoo, and brother Gene (Marge) Bowman of West Des Moines, IA. He is also survived by several extended family members and a host of friends.

Funeral services for Bill will be held on Thursday, April 9, 2015 at 10:30 a.m at the Trinity Lutheran Church in Bruning. Military graveside services will follow the funeral in the Bruning Public Cemetery. Visitation will be held on... View Obituary & Service Information

The family of William A. "Bill" Bowman created this Life Tributes page to make it easy to share your memories.

Funeral services for Bill will be held on Thursday, April 9,...