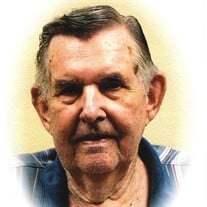 Funeral services will be held at 10:30 AM on Tuesday, September 16, 2014 at the Stockholm Lutheran Church in Rural Shickley, NE. Public visitation will be held from 1:00 PM through 8:00 PM on Monday, September 15, 2014 at Farmer & Son Funeral Home, Geneva, NE. Graveside services will take place in the Swedish Cemetery, Rural Shickley, NE. Memorials are directed to the family for a later designation. William Robert (Bill) Sharp was born on February 27, 1927 in Chicago Illinois, to William Henry Sharp and Mabel (Bye) Sharp. He joined his Heavenly Father on September 11, 2014 at the age of 87 years, 6 months and 15 days. Bill attended Farnsworth Elementary School in Chicago and Taft High School before enlisting in the United States Navy at the age of 17 in 1944. (Bill’s father had to sign the papers for his enlistment because he was too young to freely enlist.) Bill served in the Navy during World War II and took training with the Navy’s Scouts and Raiders who were precursors of the Navy Seals before serving with the Fleet in the Pacific as a sonarman. He was discharged at the end of WWII and attended Wright Junior college in Chicago on the GI Bill, studying Mortuary Science. Bill was recalled to Active Duty again for the Korean Conflict and served his country again. While in Chicago between his stints in the Navy, Bill met a pediatric nurse from Nebraska at the Chicago Temple. Euhla Mae Hendrickson was a farm girl who was working in the city. They were united in marriage on October 9, 1952 at Stockholm Lutheran church in rural Shickley, just a half mile south of the farm where Euhlie was raised. They settled in Bill’s hometown of Chicago, where Bill worked for the Federal Reserve Bank before moving into sales. He finished his career back with the Federal Government, retiring from the U.S. Postal Service. On April 1, 1972, Bill and Euhlie were blessed with a son, William Erik (also known to the family as Billy or Bill Jr.). The family traveled together, going hunting and fishing in Canada and other places and making regular trips to Nebraska. Bill passed his love of the water on to his son, and they spent numerous hours at their lake house in Fontana, Wisconsin, as well as sailing on Lake Michigan in Chicago. Bill also enjoyed painting and classical music all his life. He had a wonderful singing voice and enjoyed sharing it. Bill was preceded in death by his parents, William H and Mabel Sharp; his wife’s parents, Albert and Lillie Hendrickson; his brother and sister in law, Richard and Patricia Sharp; brothers-in-law, Maurice and Joan Hendrickson, LeeRoy Hendrickson; sisters-in-law, Norma Hendrickson, Melba and Dellmond Replogle and Zelpha and Randy Burbank. He is survived by his wife, Euhla Mae; his son, William Erik, brother –in-law, Richard Hendrickson; sister-in-law, Sheila Hendrickson; and numerous nieces and nephews, including Celeste Sharp Lezarski and Christopher Sharp. He is also survived by a close cousin, Carolyn Schlecht.

Funeral services will be held at 10:30 AM on Tuesday, September 16, 2014 at the Stockholm Lutheran Church in Rural Shickley, NE. Public visitation will be held from 1:00 PM through 8:00 PM on Monday, September 15, 2014 at Farmer & Son Funeral... View Obituary & Service Information

The family of William R. Sharp created this Life Tributes page to make it easy to share your memories.

Funeral services will be held at 10:30 AM on Tuesday, September...

Send flowers to the Sharp family.