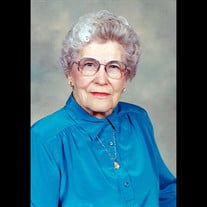 Wilma Margareta Augusta Holtzen Anderson was born to Alvin and Nellie (Dunker) Holtzen on September 1, 1917 on a farm near Deshler, Nebraska and passed away on July 12, 2017 at the age of 99 years, 10 months, and 11 days. She was the oldest of 12 children. Wilma was baptized September 16, 1917 and confirmed May 8, 1932 at Trinity Lutheran Church in Friedensau, Nebraska. Wilma attended her years of elementary school at Friedensau Lutheran School. She then attended high school at Deshler, Nebraska where she graduated in 1936. After graduation she worked wherever she could find employment, which led her to California where she found work while staying with a relative. Time passed and she came back to Nebraska where she worked in Shickley as a care-giver and enjoyed roller skating and dancing. Shickley is where Wilma met and married Tyndall Anderson March 12, 1942. Two weeks later he entered the Army until he was discharged December of 1945. They moved back to Ogallala where Tyndall was previously employed. This union was blessed with three children. Margaret and Carolyn who were born in Ogallala and then they moved to a farm near Ong and later Steve was born. They continued farming in the Shickley area until retiring in 1981 and moving to Shickley. During this time Wilma was a faithful helper in all operations on the farm. She was a devoted housewife and mother. She loved sewing clothes for the girls and others. Wilma was a faithful member of Zion Lutheran Church, ladies aid, Bible studies and LWML. She also delivered meals on wheels. As time passed and Tyndall’s health began to fail, she was a faithful care-giver for him until his death in 1984. She then spent time in her flower garden, mowing her yard and her new hobby of ceramics. She enjoyed her neighbors and you could find them having a cup of coffee and visiting. She was preceded in death by her parents; six brothers; three sisters; and one son-in-law. She is survived by her daughters, Margaret McCollough of Kearney and Carolyn Schlegel and husband Les of Shickley; one son Steve Anderson and wife Jolene of Shickley; two sisters Lorna Harms and husband Don of Deshler and Audrey Dittmer and husband Joe of Byron; brother-in-law Earl Anderson of Shickley, sisters-in-law Esther Anderson of Geneva, Luella Holtzen and husband Delbert of Missouri, and Joan Holtzen of Arizona; nine grandchildren and 17 great grandchildren; and many nieces and nephews. A Funeral Service for Wilma was held on Monday, July 17, 2017 at 10:30 a.m. at the Zion Lutheran Church in Shickley. Pastor James Moll officiated the service. Stanley Johnson accompanied the congregation in the singing of “I Know That My Reedemer Lives,” “Blessed Assurance,” and “Beautiful Savior.” Pallbearers for the service included Monty McCollough, Greg McCollough, Mike McCollough, Grant McCollough, Scott Schlegel, Scott Reynolds, Kevin Anderson, and Nathan Anderson. Interment was held in the Shickley Public Cemetery following the Funeral. Farmer & Son Funeral Home conducted the services. Online condolences can be left at www.farmerandsonfuneralhome.com. Memorials are suggested to Mission Central, 40718 Hwy E16, Mapleton, Iowa 51034.

Wilma Margareta Augusta Holtzen Anderson was born to Alvin and Nellie (Dunker) Holtzen on September 1, 1917 on a farm near Deshler, Nebraska and passed away on July 12, 2017 at the age of 99 years, 10 months, and 11 days. She was the oldest... View Obituary & Service Information

The family of Wilma M. Anderson created this Life Tributes page to make it easy to share your memories.

Wilma Margareta Augusta Holtzen Anderson was born to Alvin and...