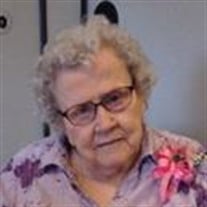 A Memorial Mass will be held on Tuesday, February 28, 2017 at 10:30 a.m. at St. Joseph's Catholic Church in Geneva, Nebraska with Father Scott Courtney officiating. Rosary will be held prior to the Memorial Mass at 10:00 a.m. at St. Joseph's Catholic Church in Geneva, Nebraska on Tuesday, February 28, 2017. No Visitation-Cremation. Memorials are to be directed to the family for a later designation. Wilma Mary (Marson) Miller was born to William and Marcella (Sullivan) Marson on April 4, 1923 in Shickley, NE and passed away February 19, 2017 at Heritage Crossings in Geneva, NE at the age of 93 years. She was one of 7 daughters in the family. Wilma was born and raised on the farm with her twin sister, Wilmetta, and her 5 other sisters. She was the “boy” that her dad never had. She enjoyed working on the farm, gardening and helping her dad with a variety of tasks around the farm. In her teen years, her dad would load up all the girls and take them to town for dances. He often fell asleep on the way back home, but their trusty horse knew the way regardless. After graduating the 8th grade, it was determined that her twin sister wasn’t well enough to go onto high school, so Wilma stayed by her side and helped the country school teacher so that she could be there with Wilmetta. Her family spent a lot of time with their neighbors. Whenever a new barn was erected, they celebrated by having a country barn dance. Wilma worked at a local Shickley café and was introduced to Donald J Miller by Don’s sister, Dorothy. Wilma and Don were married on June 28, 1943, and to them three children were born. Stan (Sally) Miller of Geneva, NE, Nancy (Don) Lahners of Carleton, NE and William “Bill” (Shari) Miller of Clay Center, NE. Wilma’s true passion was that of a farm wife and homemaker, raising her three children. She would take homemade meals to Don in the fields everyday. She was a devout member of St. Joseph’s Catholic Church in Geneva. Every Friday, Wilma would go visit the nuns who instructed at the Catholic school and would leave with a grocery list. Since the nuns were unable to leave the campus, Wilma made a weekly visit to the grocery store for them. She also volunteered her time helping to clean the school. She took great joy in serving others and her church. Her faith never wavered throughout her life. After retiring from farming, Don and Wilma left the family farm and moved into town. She worked for some time at the Youth Rehabilitation and Treatment Center as a cottage parent. She also had another important role which was “Grandma.” Wilma spent a lot of time shuffling around her 8 grandchildren, attending events and family parties and holidays. She loved watching Don give them rides around in his restored, Model A car. When asked what they remember most about the family gatherings, her kids and grandkids would instantly reply with “her angel food cake!” Although many have tried, none have been able to produce an angel food cake like Wilma! Right before Christmas of 2007, Wilma lost the love of her life, Don, to cancer. She missed him every single day. A few years later, she moved from her home in Geneva to Heritage Crossings also in Geneva. She made numerous, instant friends and was very involved with the daily activities at Heritage. She played in the bell choir and attended Catholic mass at Heritage every Wednesday. She always had a smile on her face and an iconic laugh that was unique to only her. She was a lovely lady with a hint of sarcasm coupled with a jovial outlook that made anyone around her drawn to her. She left a profound mark on those that helped care for her. She will be deeply missed by many. Wilma is survived by her three children, 8 grandchildren and 18 great grandchildren, sisters Victoria Mulvey and Francis Domenico; sister-in-law Dorothy (Lee) Nelson. She is also survived by numerous nieces, nephews, cousins and friends. She is proceeded in death by the love of her life, Donald J Miller; twin sister, Wilmetta Roth; sisters Doris Brosius, Kathryn Murray and Mary Marson; her parents William and Marcella Marson.

The family of Wilma M. Miller created this Life Tributes page to make it easy to share your memories.