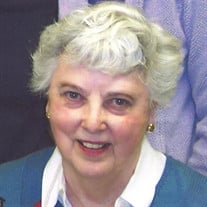 Wilma "Billie" Sandifer, 79, of Monroe, New Jersey, passed away on Thursday, March 31, 2016, at The Elms of Cranbury in Cranbury, New Jersey. She was born in Fairmont, Nebraska on February 26, 1937 to C. Donald & Dorothy (Smith) Nichols. Billie graduated High School from York, NE. She came to East Windsor in 1974 and then moved and lived for 8 years in Pan Handle West Virginia before moving to Monroe, New Jersey 7 months ago. She received a Bachelor of Science degree in primary education from the University of Nebraska-Lincoln and worked as a substitute teacher for the East Windsor Regional School District for over 30 years, having retired in 2005. Billie's heritage is within shouting distance of this grave site...Most of her Great Grand Parents, Grand Parents, Parents, Aunts, Uncles and Cousins were residents of Fillmore County including marriages and deaths...many are buried right here in Fairmont Cemetery. Billie has returned to Home Ground to be put to Rest with her Parents and relatives...including her child, 7 month old Melissa Deb Sandifer, who is also buried in this Family Plot. Missy Deb was named after her Maternal Gr. Father, Wm. Deb Smith of York, In Celebrating Billie's Life, all who knew her are aware of her multi-talents. Most of her Talents came naturally from the family exposure she had by her Parents. Her Mother, Dorothy Smith Nichols had an amazing flare of decorating, organizing and beautifying anything she came in touch with. Billie took on her Mother's special quality and could "see" groupings and colors to spark something. She amassed the many Collectable's she acquired into wonderful displays....from Junk to what appeared to be Treasure and a Living Style. If the view of a person is that "You are Your Father's Daughter..." It couldn't be more true for Billie who was THE perfect example of THIS in her Life. She looked like her Father, Don Nichols....thick, dark, curly hair and brilliant blue eyes. She had his upbeat personality, energy and skills in Crafts. She could fix most things when asked to help in figuring out what the problem was. They both had Energy that was limitless. They both were Beautiful People...Father & Daughter...She was beautiful and regal. Her demeanor was purposeful...and she exemplified structure & organization. They both were cheerful in their final days in a Medical Care Center...Don in Hearthstone in York and Billie at The Elms in Cranbury, New Jersey. Although she lived in many States...Home was always Nebraska, especially The University of Nebraska...Always Loyal & Loving and a 1961 graduate. She had many Passions. A Main one was Sustaining The Nichols Family Farm as the The Nichols Farm which is just 3 miles west and 2 miles South from this EXACT SPOT !!. This was her heritage and she wasn't about to be the one person that was going to break the chain...it's still in tact...thanks mainly to the effort of long time Partners... Don Miller (the elder) and Max Miller (the next generation). A Second passion was the good care and works of York-Adopt-A-Pet. She got this passion from her Mother when Gail and Judy Nordlund began Y-A-A-P. A Third passion was family genealogy research...not just the Nichols, also The Smith's, Lashbrooke, Lashawnsky, Evans, Sandifer. She had 4 genealogy books published and are used as reference books at historical repositories in Iowa, Indiana, Salt Lake City and on the internet. She was always a work in progress in this area. Her Craft Skill Passions were never half-baked efforts. Her efforts and skills included: Her fine muscle control that led her to doing wonderful results in: Calligraphy - both in the craft and in Teaching the craft. She studied this at The New School in New York. Toll Painting - of her signed Holiday Cards and Gold overlay trays. She studied this at the Boston Art Institute. Custom Rug Hooking - She learned from her Father who was a a Multiple Year Blue Ribbon Winner at Nebraska State Fair. Needle Point Masterpieces - She shared far and wide with friends. In Recent Years after her Breast Cancer Surgery in Winchester, Va., she relentlessly supported and participated in their Support Group Activities. She impacted so many there by her example and the projects she participated in toward giving comfort and support particularly for new breast cancer women. In living thru the last six months of her deteriorating medical life, she lived thru the discomfort and pain with a resolve and patience that was focused on Kara and Bill and The Good Life she's had in her 79 years. The Lord Blessed her with Talents and Skills. She used them to benefit others thru her Care and Giving Back. Billie was predeceased by her parents, C. Donald Nichols and Dorothy (Smith) Nichols. She is survived by her loving husband of 54 years, William Sandifer, and her daughter, Kara Sandifer. Family and friends may call on Monday, April 11, 2016, from 5:00 p.m. to 8:00 p.m. at the A.S. Cole Funeral Home, 22 North Main Street, Cranbury, NJ. Graveside services will take place on Wednesday, April 13, 2016 at 10:00 a.m. at the Fairmont Public Cemetery in Fairmont, NE. Saul Funeral Home is handling arrangements in New Jersey and Farmer & Son Funeral Home is handling local arrangements. In lieu of flowers, contributions may be made in Mrs. Sandifer's memory to Susan G. Komen for the Cure. Attn. Donor Services P.O Box 650309, Dallas, TX 75265-0309.

Wilma "Billie" Sandifer, 79, of Monroe, New Jersey, passed away on Thursday, March 31, 2016, at The Elms of Cranbury in Cranbury, New Jersey. She was born in Fairmont, Nebraska on February 26, 1937 to C. Donald & Dorothy (Smith) Nichols. Billie... View Obituary & Service Information

The family of Wilma (Nichols) "Billie" Sandifer created this Life Tributes page to make it easy to share your memories.

Send flowers to the Sandifer family.