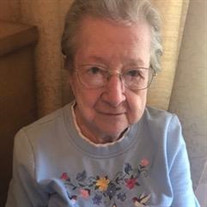 In honoring her wish to be cremated no services will be held at this time. Wynona Earlyne Lechtenberger was born to Earl Walter Christiancy and Emma Marie Schott on April 17, 1928 at Strang, Nebraska, and passed away July 24, 2020, at Fairview Manor in Fairmont, Nebraska at the age of 92. Wynona lived her life with great diligence, a sharp wit, and a passionate attentiveness to those she loved. During her school years in Strang, Wynona was active and very accomplished in 4H, often appearing in the local paper for her achievements. Later, as a mother and then grandmother, she found great pleasure in cooking for her family and tending to her garden, which produced exceptional tomatoes. She took pride in her home which was always spotless, well labeled and organized. Her grandkids knew her as a “killer card player” and thanked God she wasn’t playing for cash. She had a soft spot for animals and took in any stray cat who needed love. Wynona gave readily, abundantly and tirelessly-as often as she saw a need she could meet. She had a generous and giving heart-always a giver and never a taker. Wynona was married to Jack Lechtenberger of Geneva, Nebraska on November 30, 1947, and to them 2 children were born. After moving to Geneva with Jack, she decided to go to cosmetology school to become a hairstylist and eventually owned a small hair salon in Geneva. She later retired from the salon to work at the farm, Lechtenberger Dairy, with her husband, Jack. After Jack passed away, Wynona worked with at-risk youth at the Youth Rehabilitation Treatment Center and later retired fully to live her life at her home in Geneva until having to relocate to the Assisted Living at Fairview Manor in Fairmont in March of 2017. She was preceded in death by her parents; husband, Jack; and sons, Lary Lechtenberger and Randy Lechtenberger. Wynona is survived by her grandchildren, Amber Chandler, San Antonio, Texas; Ben Lechtenberger, Omaha, Nebraska; Alison Lechtenberger, Omaha, Nebraska; Jason Lechtenberger, Omaha, Nebraska and Autumn Lechtenberger, Ames Iowa; Charles Lechtenberger, Omaha, Nebraska; daughters-in-law, Nettie Romine, Grand Island, Nebraska; Kathleen Lechtenberger, Omaha, Nebraska and Fran Freeman, Ceresco, Nebraska.

In honoring her wish to be cremated no services will be held at this time. Wynona Earlyne Lechtenberger was born to Earl Walter Christiancy and Emma Marie Schott on April 17, 1928 at Strang, Nebraska, and passed away July 24, 2020, at Fairview... View Obituary & Service Information

The family of Wynona Earlyne Lechtenberger created this Life Tributes page to make it easy to share your memories.

In honoring her wish to be cremated no services will be held...

Send flowers to the Lechtenberger family.