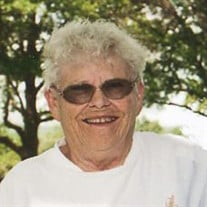 Wyona E. (Ficken) Wagner, 82, entered into eternal peace on November 5, 2014. She passed away peacefully at Blue Valley Lutheran Homes with family by her side after fighting a courageous battle with cancer. Wyona, who went by Onie, was born on a farmstead near Oak, Nebraska, on September 15, 1932, to William Ficken and Winifred (Anderson) Ficken. She was the third of five children born into the family. Wyona attended Kelly School, a rural school near Oak, Nebraska, and then Nelson High School where she graduated in 1949. Following graduation, she attended Luther College in Wahoo, Nebraska. Wyona married Howard Wagner on December 26, 1954, at the United Methodist Church in Davenport, Nebraska. They would have celebrated their 60-year anniversary this year. Together they had two children, Mary and Gary. They lived in many communities, including Hastings, Davenport, Gilead, and Byron until eventually residing in Bruning. Onie worked for many years as a bookkeeper at Casper Oil in Bruning. After that she worked at Bruning Public School as a custodian until retiring in 2011. She loved seeing the kids every day, especially her grandchildren, who would always put a smile on her face. Wyona loved family and loved to travel. Every year a new adventure was in store for her and Howard as they would take their grandchildren on a week-long vacation. She looked forward to spending that time with her grandchildren. The past few years, she also enjoyed going with Howard on short weekend trips as part of the Tour Nebraska group. She loved attending family reunions and having the opportunity to reconnect and share stories and memories with family she was unable to see regularly. She enjoyed spending time gardening, reading, and doing crossword puzzles. Wyona touched the lives of many people with her smile, generosity, and sense of humor. She will always be remembered as a loving wife, mother, sister, and grandmother. Wyona was preceded in death by her parents Winifred and William; stepfather Erick Johnson,; brother Wilfred Ficken; sister Wilma Kramp; and son-in-law Jimmy Houser. She is survived by her husband Howard Wagner of Bruning, Nebraska; children Gary (Denise) Wagner and Mary Houser, both of Bruning; brother Bud (Jackie) Ficken of Hebron; sister Ellen (Allen) Bongers of Brainard; grandchildren Christina (Wagner) Henke and husband Kabin of Downs, KS, Erick (Jamie) Houser, Michael Wagner and fiancé Jordan Sales, Lacey Wagner, Shellie Houser, and Jesse Houser all of Bruning; great-grandchildren Damian Houser, Shakira Sunday, Tyler Houser, Colten Houser, Savannah Houser, Shawn Sunday, and Jamie Houser. Funeral services for Wyona were held on Monday, November 10, 2014 at 11:00 a.m., at the United Methodist Church in Bruning. Pastor Mike Anderson officiated the services. Jodi Meyer accompanied the congregation in the singing of “How Great Thou Art”, “Sweet Hour of Prayer”, and “In the Garden.” The recorded selection “Turn, Turn, Turn,” by The Byrds was also played during the service. Pallbearers for the service included John Bongers, Joel Bongers, Larry Ficken, Michael Wagner, Erick Houser, and Jesse Houser. It was Onie’s wish to be cremated following the funeral service. Farmer & Son Funeral Home conducted the services. Memorials are directed to the family to be designated at a later date.

Wyona E. (Ficken) Wagner, 82, entered into eternal peace on November 5, 2014. She passed away peacefully at Blue Valley Lutheran Homes with family by her side after fighting a courageous battle with cancer. Wyona, who went by Onie, was born... View Obituary & Service Information

The family of Wyona E. "Onie" Wagner created this Life Tributes page to make it easy to share your memories.

Send flowers to the Wagner family.