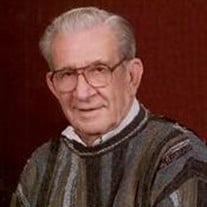 Archie Dean Chapman was born to Claude and Ella (Ondrak) Chapman on February 10, 1926 in rural Fairmont, Nebraska. He left this world on October 31, 2012 in Lincoln, Nebraska. Archie had attained the age of 86 years, 8 months, and 21 days. Archie attended grade school in Fairmont and graduated from Exeter High School with the class of 1943. He joined the US Navy in 1944 and served with the Dive Bomber Squad 7. Following his discharge from the Navy, he attended Doane College at Crete, Nebraska. Archie received his Bachelor’s degree in 1951 and later pursued his education with a Master’s degree from UNL in 1964. Archie met Dee at a dance in Geneva on June 10, 1946. From then on, all of their dates consisted of dances. He gave her a ring on Valentine’s Day 1948. On June 16, 1948, he married Delight Joann Wright at Ohiowa, Nebraska, and to this union 4 children were born: Frank, Randy, Nancy, and Paul. His first teaching and coaching position was in Stella, Nebraska followed by Sterling, Geneva, and Lexington. He loved teaching history, as well as coaching basketball and football. He retired from his teaching position in 1978 to become the business manager at Jones Plumbing in Lexington where he was employed until 1990. Archie and Dee returned to Geneva in 1991 for their retirement. During this time, he became a Teammates mentor and passed this experience on to his son and grandson. He was a life-long learner and enjoyed conversations about most any topic. His hobbies were a love of reading, crossword puzzles, woodworking, model trains and jigsaw puzzles. He enjoyed his grandchildren’s events, and in his later years especially enjoyed visits from his great grandchildren. He also looked forward to his former student’s class reunions and alumni banquet celebrations. Archie was a member of the United Methodist Church, Geneva Rotary Club, Geneva Lions Club, the VFW and the American Legion. He was a past president of the Fillmore County Teacher’s Association, the MUDECAS Association, and the Lexington Education Association. Archie was also a member of the National Education Association, Nebraska State Education Association, NSEA Executive Committee District IV, and the Nebraska Coaches Association. Archie was preceded in death by his parents, Claude & Ella Chapman in 1994 and grandson-in-law Tom Bader. He is survived by his wife Dee, his companion of 64 years; son Frank and wife Gail of York, Nebraska, son Randy and wife Judy of Lexington, Nebraska, daughter Nancy and husband Steve Heiser of Lincoln, Nebraska, and son Paul also of Lincoln, Nebraska; six grandchildren, Amy Chapman-Bader of Lexington, Nebraska, Tony and wife Kerry of Grand Island, Nebraska, Sara Chapman-Gomez and husband Vic of Kearney, Nebraska, Tyler and wife Latisha of Wichita, Kansas, Madeleine Heiser and Nigel Chapman of Lincoln; 8 great grandchildren including Katie and Sam Gomez of Kearney, Nebraska, Addison, Olivia, and Ella Chapman of Grand Island, Nebraska, Londyn, Sydney, and Liberty Chapman of Wichita, Kansas; sisters-in-law Gloria and husband Hal Mullison of Flat Rock, North Carolina and Elnora and husband Ed Schulz of Oxnard, California; and many nieces, nephews, cousins, colleagues and friends. Funeral services for Archie were held on Saturday, November 3, 2012 at 10:30 a.m. at the Geneva United Methodist Church. Pastor Ron Harris and Kim Dunker officiated the services. Sondra Myers accompanied Sue Rickert in the singing of “Because He Lives” and “Precious Lord, Take My Hand.” Sondra also accompanied the congregation in the singing of “Hymn Of Promise.” Pallbearers for the service included Tony Chapman, Tyler Chapman, Larry Bornschlegl, Dick Nelson, Jim Nichols, P.R. Farmer, and Nigel Chapman. Honorary bearers included all of Archie’s former student-athletes. Interment was held in the Geneva Public Cemetery. Folding of the United States Flag and presentation was performed by the Geneva American Legion Sloan-Bolton Post 68. Farmer & Son Funeral Home was in charge of the arrangements. Memorials are directed to the United Methodist Church, Teammates Mentoring Program, York Dialysis Center, or the Geneva Public Library.

Archie Dean Chapman was born to Claude and Ella (Ondrak) Chapman on February 10, 1926 in rural Fairmont, Nebraska. He left this world on October 31, 2012 in Lincoln, Nebraska. Archie had attained the age of 86 years, 8 months, and 21 days.... View Obituary & Service Information

The family of Archie D. Chapman created this Life Tributes page to make it easy to share your memories.